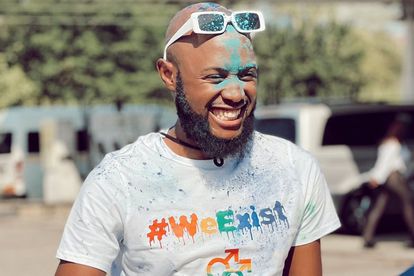 Radio presenter and actor Mohale Motaung led the LGBTQI+ Pride Parade in Mbombela, Mpumalanga on Wednesday 27 April. In a heartfelt speech as per DailySun, Motaung spoke on the importance of “being yourself” as a queer person.

ALSO READ: ‘Actually, I was dizzy’: Mohale Motaung on his marriage to Somizi

The first-ever Mbombela Pride Parade was held in August 2014. According to MambaOnline, approximately 1 000 people took part in the march and enjoyed a post-parade picnic afterward.

Organiser Joy Kunene described it as a “real success” adding that there was positive feedback from the community.

“People joined the march and marched with us. The police were visible and supportive. They gave us around 20 police and traffic officers to assist.”

In a speech given to the Mbombela crowd, Motaung said some of the LGBTQI+ community were scared to come out of the closet.

“This is because we fear for our lives each and every day. Every day, we are reminded of how we are not normal and how we are a waste”.

The 28-year-old also spoke about the LGBTQI+ community accepting themselves.

“It’s important to accept yourself first before other people accept you. The reason why other people come across problems in terms of their sexuality is that they have not really accepted themselves.”

The DA has shown its support to the LGBTQI+ community several times over the last few years. Jane Sithole echoed the DA’s views on LGBTQI+ issues in South Africa.

“We have to fight for the freedom of everyone and the challenges they face.”

“You can’t be born free and be killed by hate. We must all be ambassadors and advocates.”

When does the Proteas’ third Test against Australia start?