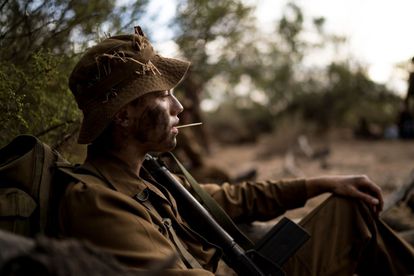 Moffie is the only South African film on the Oscars shortlist for Best Picture. Image via Twitter @MoffieFilm

Moffie is the only South African film on the Oscars shortlist for Best Picture. Image via Twitter @MoffieFilm

Oliver Hermanus’ LGBTQI+ film, Moffie, is the only South African film on the list of 276 feature films that are eligible for Best Picture at the Oscar Awards. Moffie was described by Variety as a “brutal but radiant” queer war film.

Hermanus joins a small pool of local writers and directors whose work has been considered for the prestigious awards ceremony.

Set in 1981, Moffie follows a young man who has been drafted into the South African military. While in the military, 18-year-old Nicholas (played by Kai Luke Brümmer) struggles to come to terms with his sexuality. Nicholas develops a relationship with another recruit, Dylan and the two grow closer together.

The film was released in September 2019 and has screened at various film festivals around the world, including the Venice International Film Festival, where it received a six-minute standing ovation the same year.

It was also screened at the Sundance Film Festival in January 2022.

On 20 January 2022, the Academy of Motion Picture Arts and Sciences released a list of 276 feature films that are eligible for Best Picture at the 94th Oscar Awards.

Oliver Hermanus’ Moffie is the only South African film on the 35-page list that will possibly compete against Hollywood films King Richard, House of Gucci, Spencer and Netflix’s Don’t Look Up.

The nominees for the 94th Oscar Awards are set to be announced on Tuesday 8 February.

SOUTH AFRICA AT THE OSCARS