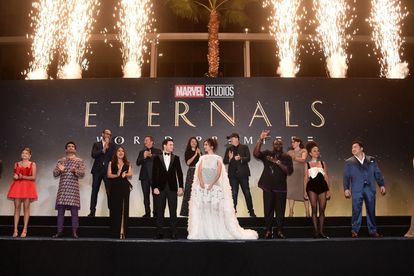 Marvel’s Eternals movie is set to be released in theatres on Friday 5 November but it’s already the centre of controversy due to its LGBTQI+ character Phastos, played by American actor Brian Tyree Henry. One angry fan noted that all the film does is “tick all the Hollywood Woke boxes.”

In the upcoming Eternals film, Brian Tyree Henry’s character Phastos is a part of a race of ancient immortal aliens and has settled down with his partner and their child.

Eternals was heavily criticised on IMBD for the inclusion of the same-sex kiss between Phastos and his partner played by Lebanese actor Haaz Sleiman.

According to The Direct, One reviewer noted that Eternals is a “crappy movie” and said “not watchable at all.”

Another reviewer wrote: “Sucky. Totally unrecognizable from the comics. All it does is tick all the Hollywood Woke boxes. Which seems to be the goal. Not storytelling. But that’s hardly surprising these days. Don’t waste your money. It’s not worth it.”

American-Palestinian actor Kumnail Nanijani who plays Kingo Eternals in response to the wave of negative comments from IMBD.

Haaz Sleiman, who plays Phastos’ partner spoke deeply about the kiss he shares with Brian Tyree Henry and expressed that is a very moving kiss.

“Everyone cried on set. For me, it’s very important to show how loving and beautiful a queer family can be. Brian Tyree Henry is such a tremendous actor and brought so much beauty into this part, and at one point I saw a child in his eyes, and I think it’s important for the world to be reminded that we in the queer community, we’re all children at one point,” Sleiman told NewNowNext.

Eternals is the first Marvel film to include an openly gay couple and a same-sex kiss.

ALSO READ: Sandra Bullock returns to the big screen in ‘The Unforgivable’ [watch]

Directed by Chloé Zhao, Eternals follows a race of immortal beings with superpowers who have secretly lived on Earth for thousands of years. The beings reunite to fight off Deviants.

Eternals will be released in US theatres on Friday 5 November.