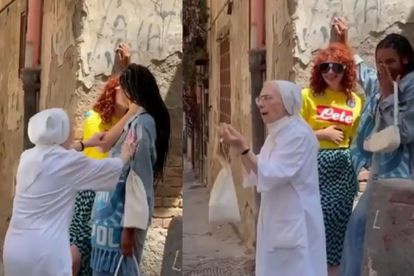 An Italian nun went viral after stopping two women from kissing during a photoshoot. Images via Twitter @publicoutsider

An Italian nun went viral after stopping two women from kissing during a photoshoot. Images via Twitter @publicoutsider

An elderly Italian nun has gone viral after stopping two female models from kissing during a photoshoot in Naples, Italy. According to The Daily Mail, a local priest said the church has always updated its views on the queer community adding that the older generation may not have kept up.

Intrepid Travel reports that Italy is accepting of the LGBTQI+ community and queer people should not have difficulty with the locals whilst on holiday.

Models and actresses Serena de Ferrari and Briton Kyshan Wilson were in Naples for a photo shoot for Not Yet Magazine when an Italian nun stopped them from kissing.

The viral video was originally posted by de Ferrari on Instagram on Sunday 17 July and has since been shared on other social media platforms.

In the video, the nun reprimands the models and the camera crew and even makes a cross sign before walking away.

The Daily Mail reported that the nun called the kiss: “the devil’s work”.

Speaking to the publication, make-up artist Roberto Mastalia said the nun had walked past the camera crew and models and asked if they had been to Mass that day.

“When we said ‘no’, she started blaming young people for coronavirus and then she saw two models posting up ready to kiss and that’s when she ran forward to split them up,” recalled Mastalia.

“Our first reaction was we were all stunned, [we] took it as a bit of a joke and in fact you can see from the video the two girls are laughing.”

“We then had to ask the nun to leave as we explained we had work to do and she slowly walked off.”

PRIEST WEIGHS IN ON WOMEN KISSING

Local priest Father Salvatore Giuliano said the nun had the same reaction has most Italian grandmothers.

“Within the church, a feeling of understanding has begun and this has started through Pope Francis who recently met for the first time with a transsexual in the Vatican,” explained the priest.

“Yes, much work still has to be done but it’s becoming increasingly clear that love between two people of the same-sex is no longer taboo in any environment.”