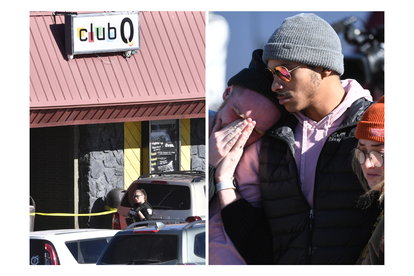 Five people are dead and 25 injured after a gunman entered Club Q, a Colorado Springs LGBTQ club, Saturday and began firing with a long rifle.Photo AFP/Canva

Five people are dead and 25 injured after a gunman entered Club Q, a Colorado Springs LGBTQ club, Saturday and began firing with a long rifle.Photo AFP/Canva

A 22-year-old gunman opened fire at Club Q an LGBTQIA+ night club on Sartuday 19 November in Colorado Springs, leaving 5 people dead and 25 injured, he was subdued by patrons in the club and later arrested by police.

The shooter was identified on Sunday as Anderson Lee Aldrich according to reports Aldrich, immediately started shooting as he entered the nightclub, the FBI and the police say that they are still investigating whether this was a hate crime or not.

The police chief Adrian Vasquez in a press conference told everyone that “Club Q is a safe haven for our LGBTQ citizens,” he explained that everyone has the right to feel safe and secure in the City.

AFP reported that “the shooting is the latest in a long history of attacks on LGBTQ venues in the United States, the deadliest of which claimed 49 lives at a nightclub in Orlando, Florida, in 2016.”

Kim Petras an advocate of the LGBTQ community and the first openly transgender solo artist to reach No. 1 on Billboard’s Hot 100 song chart took to the stage on Sunday night to pay tribute to the victims of the Club Q mass shooting.

Petras in a heartwarming speech at the American Music Awards (AMAs) talked about the role that gay clubs played in his upbringing and the role of Pop music in gay clubs:

“I can’t stop thinking about Colorado today… Gay clubs raised me, basically. And I can confidently say that no one loves pop music more than gay clubs. So, my heart goes out to you.”

Many artists paid tribute to the Club Q victims throughout the night, Dove Cameron who won the AMA new artist of the year award dedicated his award to the queer community saying:

“On the heels of the tragedy that happened at Club Q in Colorado Springs, I want to remind everyone how important queer visibility is, and how important our community is,”

The 50th American Music Awards took place on Sunday night in Los Angeles, the big winner for the night was Taylor Swift winning in all six categories in which she was nominated.