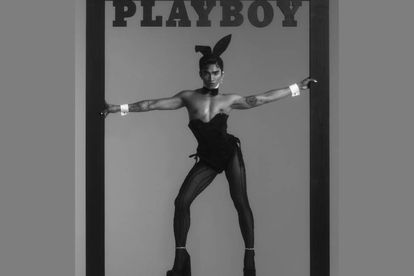 Bretman Rock is Playboy Magazine’s first openly gay cover star and the internet cannot believe it! The Filipino beauty influencer is only the third man to appear on the cover of Playboy after Puerto Rican rapper Bad Bunny and Playboy’s founder Hugh Hefner.

The question some people have is… What would Hugh say?

WHO IS BRETMAN ROCK?

You might be wondering who Bretman Rock is, so here’s a quick rundown.

Bretman Rock Sacayanan Laforga, popularly known as Bretman Rock, is a 23-year-old beauty influencer based in Honolulu, Hawaii. He rose to fame on YouTube before getting his own MTV show, MTV’s Following: Bretman Rock.

He currently has over 17 million Instagram followers and has rubbed shoulders with Hollywood A-listers, R&B artists Kehlani and Jhené Aiko and TikToker Bella Porch among others.

In 2017, he was recognised by Time Magazine as one of 30 most influential teenagers and has worked with brands like Nike and Sephora. He also won the award for the breakthrough social star at the MTV Movie and TV Awards this year.

Bretman Rock made history as the first openly gay cover star on Playboy and is only the third man to feature on the cover.

The October issue of Playboy is a digital issue and was released on 1 October. Rock says it is a “big deal” for the communities he represents.

“For Playboy to have a male on the cover is a huge deal for the LGBT community, for my brown people community and it’s all surreal. A total ‘is this even f*cking happening right now?’ type of vibe. And I’m so pretty.”

The cover was shot by photographer Brian Ziff who has captured the likes of Grimes, Doja Cat, Halsey and Noah Cyrus on film.

WHAT WOULD HUGH SAY?

While some people are ecstatic about Bretman Rock’s feature on Playboy Magazine others aren’t too happy about it.

Taking to Twitter to share his “frustrations”, one tweep wrote: “ Thank goodness Hugh died before you could do this to his legacy.”

Another Twitter user wrote: “I didn’t know Playboy still existed, but I’m sure, based on their latest issue, they will be gone in less than 30 days. Introducing their first male cover bunny. Sorry, you can’t unsee this.”

Playboy responded to the negative reviews, writing that they received similar comments when they featured transgender model Tula Cossey in 1991 and Darine Stern who was the first black model to appear on the cover of Playboy.

“If a gay man feels sexy in a bunny costume, an iconic symbol of sexiness, why shouldn’t he be able to wear it proudly?” wrote Playboy.