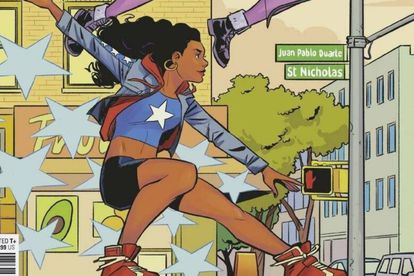 America Chavez, Marvel’s first lesbian superhero, will make her live-action debut in ‘Doctor Strange in the Multiverse of Madness’. Image via Twitter @HelPimAlive

America Chavez, Marvel’s first lesbian superhero, will make her live-action debut in ‘Doctor Strange in the Multiverse of Madness’. Image via Twitter @HelPimAlive

Here’s everything you need to know about the groundbreaking superhero, America Chavez.

America Chavez’s character was created by comic book writer Joe Casey and cartoonist Nick Dragotta. She was in the Teen Brigade, a fictional team led by the Ultimate Nullifier. According to Out Magazine, Chavez was born in an all-female world, Utopian Parallel.

After the Utopian Parallel was destroyed, Chavez settled in a Puerto Rican neighbourhood in New York. She has a few powers that help her navigate the world of superheroes. She can fly, has super speed, super strength and durability.

Since appearing in the comic book Vengeance in 2011, she has appeared in several other comic series’ including Young Avengers and A-Force. She came out as a lesbian in Young Avengers.

America Chavez will make her first live-action appearance in Doctor Strange in the Multiverse of Madness, the sequel to the 2016 Doctor Strange.

“The Marvel Cinematic Universe (MCU) unlocks the Multiverse and pushes its boundaries further than ever before.”

“Journey into the unknown with Doctor Strange, who, with the help of mystical allies both old and new, traverses the mind-bending and dangerous alternate realities of the Multiverse to confront a mysterious new adversary,” writes Marvel of the film’s plot.

America Chavez will be played by American actress Xochitl Gomez.

There are several LGBTQI+ characters in the Marvel Cinematic Universe. Loki, who has been in the MCU for some time now, is genderfluid. This was confirmed in the television series named after the character. It was also revealed in the third episode, that Loki is bisexual.

Tessa Thompson, who played Valkyrie in Avengers: Endgame revealed in 2019 that her character was bisexual. At the Endgame premiere the same year, Thompson told Variety that the romantic lives of the characters do not take centre stage.

“They have big stakes, like saving the world, so that tends to sort of trump,” she said.