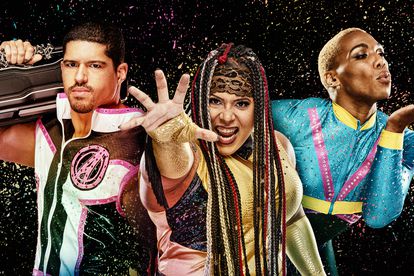 As a company All Elite Wrestling (AEW) has embraced the notion of making space for people from all walks of life.

AEW hire a diverse array of people both behind and in front of the camera and we spoke to some about their experiences being LGBTQIA in the wrestling business.

AEW is all inclusive

“It feels great. I mean, it’s it’s kind of how things should be across the board. Right? There is, not just AEW, but Warner media and the whole team behind us, our network, everybody, it’s not just a feather in a cap like it, it truly feels like from the, from the top to the bottom, that we’re all a family and everybody’s got everybody’s back. And that feels incredible. Whereas, you know, a lot of companies, most companies either pay no mind or like write you off, or, you know, don’t really support you in those ways. It feels incredible to have a whole team a mass of people, people I don’t even know or are aware of behind me 100%.”

As to why representation matters, Nyla, says its all about bringing people in from the cold.

“It matters because you, you want to see yourself represented, you know, growing up, I didn’t have anybody, like myself to look up to. So it was kind of like my own dirty little secret. I didn’t, you know, I felt something was wrong with me, I didn’t know that it was like, okay to be this way. I just, I was lost in my own head. But had I had someone to kind of look up to or even just say, not necessarily look up to you, but just say, hey, this person exists, they’re like me and see what they’re going through. If I had that, I might not have questioned so many things for so long. I might have, you know, made some changes a lot sooner in life, I would have had that confidence to know that it’s okay. So, representation matters, whether it be, you know, seeing a powerful female figure in a leadership position, being seeing a person of colour, doing something, you know, that you yourself are striving to do, or just be out there in a successful position, be it someone in the LGBT plus community, whatever it is, you want to see yourself reflected in a positive way. Because then you know, it’s okay to exist, it’s okay to be yourself. You know, even if you don’t know that person, that you have people out there, you don’t feel so alone.”

The Acclaimed have arrived

The Acclaimed’s Anthony Bowens says that AEW has created an environment that he never dreamed could have been possible.

“And to also, you know, be excited to come to work without worry of judgement, or any kind of negativity in regards to my sexuality is huge. And it’s a relief. It’s also a big part of, you know, me coming here because when I when I first before I was signed, I came here as an extra that restaurant dark during the pandemic. One of the things that I saw was the, you know, the our LGBT athletes like Sonny kiss, and Ella rose just walking around being themselves without a care in the world. And, you know, that really stuck out to me as someplace that I would love to work.”

Sonny Kiss is another performer breaking new ground in AEW, and feels that LGBTQI people within the company are being allowed to be open about who they are without making their identity a gimmick.

“I think it just happens over time. I feel like people are used to the Adrian Street and people like that, who kind of have, we’re just characters. So I feel like over time, they have to continue to keep getting to know that no, not all LGBTQ people are like this, or like that, there’s no one way. So I feel, once the fans continue to get to know, Sonny Kiss as a gender fluid, trans feminine person, I feel like it’ll just become a lot easier. And I was like, okay, like, that’s who he is. But I think it’s impossible, you know, for everyone to kind of get it immediately also, too, because the pronouns and things like that are all very mutable. So it’s just has to happen over time.”

You can catch AEW programming on TNT Africa (DStv Channel 137) with new episodes of Rampage and Dynamite airing on Saturdays and Sundays respectively from 10:00 (CAT). Episodes are also available on DStv catchup for subscribers.