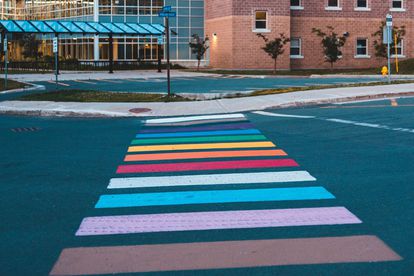 The ACDP also described homosexuality and LGBTIQ+ equality as “practices that undermine traditional African values and beliefs of all other religions.” Photo: PEXELS/Canva

The ACDP also described homosexuality and LGBTIQ+ equality as “practices that undermine traditional African values and beliefs of all other religions.” Photo: PEXELS/Canva

The notoriously queerphobic African Christian Democratic Party (ACDP) has demanded that the rainbow crossing recently installed in Cape Town to celebrate the LGBTIQ+ community be scrapped.

The colourful pedestrian crossing was unveiled to the media last week by the city’s Mayor, Geordin Hill-Lewis.

“We want all to feel welcome in our city where we embrace diversity and the addition of this bold pedestrian crossing to our road network will help spread this message. It also speaks to innovation in public spaces and support for public art that we’d like to foster,”

Hill-Lewis said at the time.

The crossing is intended to renew the Green Point area as a gay district and boost pink tourism to the city. But not everyone has welcomed the project.

News24 reports that the ACDP’s Marvin Christians slammed Hill-Lewis for backing the rainbow crossing at a council sitting on Thursday.

While not directly criticizing the intention of the crossing, Christians claimed that it violates National Road Traffic Regulations.

“For a while now, we’ve done well in terms of abiding and applying national legislation within the City of Cape Town. However, recently we saw an addition to Green Point via a pedestrian crossing,”

ALSO READ: How to come out of the CLOSET: A step by step guide

According to Christians, the regulations stipulate that the paint used for zebra crossings “must be white and may not consist of any other colour, especially not red.”

“When will this national traffic violation be corrected and the pedestrian crossing go back to black and white..?”

He demanded to know

The Cape Coloured Congress party’s Fadiel Adams also expressed concerns that the crossing was not legal.

The city has previously claimed that the paint used for the pedestrian crossing “complies with the SANS standards for road markings.”

ALSO READ: Gay Bath House Culture – it’s not what you think it is

While the rainbow crossing has generally been welcomed by the city’s LGBTIQ+ community some have described it as “pink-washing” and questioned why the city has failed to support vulnerable and less-privileged LGBTIQ+ people.

This Cape Town rainbow crossing was the second to be unveiled in South Africa. The first was painted in Church Square in Pretoria earlier this month.

The ACDP is known for its anti-LGBTQ views. The party previously blocked two LGBTQ-affirming motions in Parliament in 2011 and in 2015, including a condemnation of homophobia. The ACDP also voted against the passage of the Civil Union Bill that legalised same-sex marriage in 2006.

In 2020, the party railed against “the liberal West’s desire to impose the LGBT+ agenda on the African continent” and urged “those who wish to see the moral and social fibre of African communities strengthened, to reject this call in its entirety.”

The ACDP also described homosexuality and LGBTIQ+ equality as “practices that undermine traditional African values and beliefs of all other religions.”

In 2021, it protested against the Western Cape’s draft policy on gender identity and sexual orientation in public schools, claiming that it “promotes promiscuity” and aims “to change the sexual and gender norms of society.”