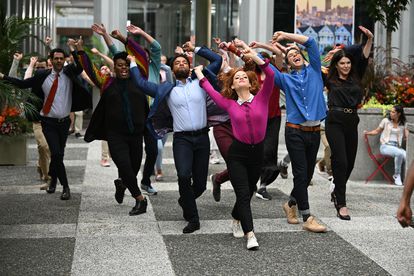 This show will have you singing along in no time. Image: Showmax/Supplied

This show will have you singing along in no time. Image: Showmax/Supplied

You know how sometimes you’re watching a movie and everything seems normal until someone suddenly bursts into song? Welcome to Zoey Clarke’s life.

Ever since that weird thing happened to her during an MRI scan, she finds herself cursed (and blessed) with the ability to hear other people’s innermost thoughts… in song.

Zoey’s Extraordinary Playlist is a comedy-drama with a twist (and shout) that sees its central character go from a talented but awkward young computer programmer to life in a surreal musical. Accordingly, Zoey might at any moment find herself in the middle of a city-wide flashmob or a too-close-for-comfort private musical moment with a coworker.

On Levy’s performance, The Hollywood Reporter said: “It’s no surprise at all that the Suburgatory star is able to use her trademark sarcasm to cut through occasional treacle. More revelatory is how much she’s able to add to the series’ joy.”

Golden Globe nominee Lauren Graham (who started acting on stage and in musicals before she starred in Gilmore Girls and Parenthood) co-stars, along with Oscar winner Mary Steenburgen (The Last Man on Earth, Back to the Future III), Critics Choice and Teen Choice nominee Peter Gallagher (The OC, Grace and Frankie), and John Clarence Stewart (What/If, Luke Cage).

The series has an 8.2/10 score on IMDb  and scooped a 2020 Emmy for Outstanding Choreography (for multi-Emmy-winning La La Land, So You Think You Can Dance and Dancing with the Stars choreographer Mandy Moore, who also co-produced).

‘Brimming with joy and compassion’

The Globe and Mail said: “It is brimming with both joy and compassion, this strange contrivance, and highly recommended”.

TV Fanatic asked: “How is it that a show steeped in magical realism consistently manages to deliver some of the most authentic and realistic portrayals of humanity on television?”

But the show’s jubilant concept came from a deeply personal emotional place. The heart-rending father-daughter relationship at the centre of the show was inspired by creator Austin Winsburg’s own father’s struggle with a degenerative neurological disease.

“For the last six months that my dad was alive, we didn’t really know how much he was processing, if he was processing what was really going on in his brain,” Winsburg told Entertainment Weekly.

“With some distance, when I started thinking about it, I thought, ‘What was really going on in my dad’s head during that time that he was sick?’” Winsburg said. “What if the way my dad saw the world when he was dying was through big musical numbers? That was my way into the show.

“It actually made me feel happy. It actually felt joyous rather than just sad, the idea that suddenly he had this musical take on the world.”

That transformative leap gave rise to Zoey’s story. As Newell’s character Mo put it: “Songs are all just an expression of our deepest wants and desires – joy, pain, heartbreak, yearning, forgiveness, revenge… good music can make you feel things you can’t express in words.”

The heart of ‘Zoey’s Extraordinary Playlist’

Zoey’s crowd-pleasing playlist is the beating heart of the show. It adds to its cross-generational appeal with big-budget hits by everyone from Ed Sheeran, Miley Cyrus and Katy Perry to The Beatles, The Rolling Stones and Whitney Houston.

With a line-up like this – complete with full musical staging and stunning dance choreography – you can expect to catch yourself singing along and even pulling out a few moves in the kitchen long after the TV’s turned off. (Moore has revealed it’s the first time in her career she’s had a dance rehearsal shut down by the cops after neighbours complained about the noise.)

Collider’s Perri Nemiroff, who hailed Zoey’s Extraordinary Playlist as one of her “absolute favourite shows of 2020”, said:

“If you judged this show by the first little bit of promo material you saw, and you think it’s one thing, it’s so much more… you have my word: it will not disappoint you.”