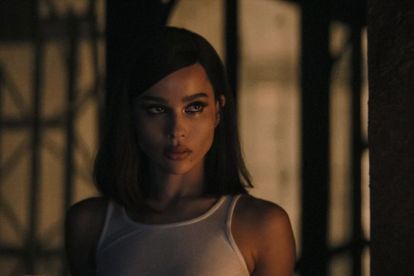 Zoe Kravitz has been studying cats and lions to improve her performance as Catwoman on ‘The Batman.’ Image via Twitter @IndieWire

Zoe Kravitz has been studying cats and lions to improve her performance as Catwoman on ‘The Batman.’ Image via Twitter @IndieWire

Zoe Kravitz studied lions and cats for her role in The Batman.

The 33-year-old actress – who plays Selina Kyle and her alter ego Catwoman in Matt Reeves’ upcoming blockbuster, which stars Robert Pattinson as Bruce Wayne and the Caped Crusader – has opened up on her research to help her add something special to her performance.

Speaking to Empire magazine about her work with stunt coordinator Rob Alonzo, she said:

“We watched cats and lions and how they fight, and we talked about what is actually possible when you’re my size, and Batman’s so much stronger than me.”

“What is my skill? It’s being fast and tricky. So we did some really interesting floor work that incorporated different kinds of martial arts and capoeira and a kind of feline, dance-like movement,” she added.

She also described her character’s portrayal in the film as an “origin story” as Selina starts to discover “who she is.”

“So it’s the beginning of her figuring out who she is, beyond just someone trying to survive. I think there’s a lot of space to grow and I think we are watching her become what I’m sure will be the femme fatale,” she explained.

Meanwhile, last year filmmaker Reeves opened up on this new version of Catwoman and how it will compare to previous takes, especially given that Kravitz previously voiced the character in 2017’s The Lego Batman Movie.

“You have an iteration that you’ve never seen of what she’s doing, but it touches on all of these iconic things that people know from the comics. It’s always about trying to square what you know with what also is new,” she said.