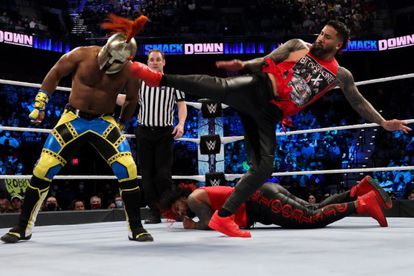 WWE Smackdown took steps towards the Royal Rumble with their first show of 2022.

There was a big champion vs champion standoff and we saw titles defended in the main event.

In a Championship Confrontation, newly-crowned WWE Champion Brock Lesnar and his rehired Advocate Paul Heyman returned to SmackDown to stand in the ring and engage in a tense war of words with the dominant Universal Champion Roman Reigns, despite the fact that Reigns made it clear he never wanted to see either one of them again.

Although The Beast suggested that they have a Champion vs. Champion Match right then and there on SmackDown, Reigns made it clear that it wasn’t his idea and that the blue brand only carries out his will. When a conflicted Heyman eventually got in the way with his surprise pleas for Lesnar not to talk to Reigns, however, The Head of the Table took advantage of the distraction and hit Brock with an earth-shattering Superman Punch.

After earning the opportunity to challenge Shinsuke Nakamura for the Intercontinental Championship in a 12 Days of Christmas 12-Man Gauntlet Match, The Master Strategist went one-on-one with the rocking powerhouse Rick Boogs.

Prior to the match, the fireworks started backstage when Zayn came in contact with Johnny Knoxville. The Jackass star had come to SmackDown to plead his case to WWE management as to why he should be allowed to compete in the 2022 Men’s Royal Rumble. In response, The Master Strategist informed him that he isn’t qualified to compete in a Royal Rumble Match.

Against Boogs, Zayn made the mistake of trash talking Nakamura outside the ring, and Boogs rolled him up when he climbed back into the ring for the quick pin.

Then, in the aftermath, Knoxville suddenly emerged and proceeded to throw Zayn over the top rope! Moments later, it was announced that Knoxville was being entered into the Royal Rumble Match!

SmackDown’s Women’s Champion Charlotte Flair came before the WWE Universe and highlighted a number of exciting competitors for the 2022 Women’s Royal Rumble Match. She then dropped a bombshell by declaring that she would join the match as a way to pick her own challenger for WrestleMania when she won.

Naomi emerged and proposed that Charlotte didn’t have to wait to name a challenger. Instead, she suggested The Queen defend the title against her right then and there. When Flair refused, Naomi slapped the titleholder and paved the way for a Championship Contenders Match.

After a slap from Naomi to the SmackDown Women’s Champion, Charlotte Flair takes on The Glowing Superstar in a Championship Contenders Match.

Just when it looked as if the subsequent matchup would end in a count-out victory for Naomi, WWE Official Sonya Deville emerged to “clarify” that the match could not be won by count-out. Then, in a critical moment, Deville again “clarified” that the match couldn’t be won by disqualification either, but only by pinfall or submission. Then, when all was said and done, Charlotte emerged victorious over Naomi with Natural Selection.

After helping Happy Corbin launch a vicious 2-on-1 sneak attack that injured Drew McIntyre at WWE Day 1, Madcap Moss emerged on the latest episode of “Happy Talk” dressed up like The Scottish Warrior in order to have a few laughs at his expense.

The Viking Raiders did not take to kindly to the joke, though, and decided to try and put an end to the wisecracks by Happy Corbin & Madcap Moss. Despite their hard-fought effort and noble intention, however, they were defeated when Moss hit Punchline.

In a turbulent SmackDown Tag Team Title Street Fight, titleholders Jimmy & Jey Usos and their longstanding rivals King Woods & Sir Kofi Kingston fought tooth and nail, incorporating several weapons throughout the harrowing encounter. In the final moments, The Usos proved they were “The Ones” when they delivered 1D through a table for the victory.

Despite the brutality of the match, nothing raised as many questions as what came after. Prior to the main event, WWE Official Adam Pearce made it clear he had picked Roman Reigns’ opponent for Royal Rumble.

After showing up at Roman Reigns’ door laughing at the conclusion of SmackDown, has Seth “Freakin” Rollins been selected by Adam Pearce to challenge the Universal Champion at Royal Rumble?