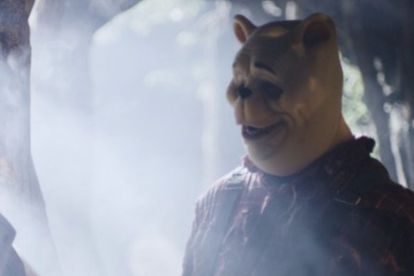 In the upcoming ‘Winnie the Pooh: Blood and Water’ horror film, Pooh and Piglet go on a rampage. Image via Twitter @UndercoverCine

In the upcoming ‘Winnie the Pooh: Blood and Water’ horror film, Pooh and Piglet go on a rampage. Image via Twitter @UndercoverCine

Created by English author Alan Alexander Milne, Winnie the Pooh was one of the most loved animated characters of all time. While the chubby yellow bear kept us (and our little ones) entertained, he was something in store for the adults… A horror film titled Winnie the Pooh: Blood and Honey is in the works and Pooh along with his sidekick Piglet, is going on a rampage!

WINNIE THE POOH: BLOOD AND HONEY

In 2020, the original Winnie the Pooh stories were placed in the public domain in January 2022, which meant anyone could claim the stories.

“They’ve gone back to their animal roots,” explained Waterfield.

The director also described them as a “vicious bear and pig” who go around finding prey.

“When you try and do a film like this and it’s a really wacky concept, it’s very easy to go down a route where nothing is scary and it’s just really ridiculous and really, like stupid. And we wanted to go between the two.”

FIRST LOOK AT THE HORROR

The much-loved Winnie the Pooh will sadly not be wearing his little red shirt. Instead, he’ll be wearing a lumberjack suit.

“When you see the cover for this and you see trailers and the stills and all that, there’s no way anyone is going to think this is a child’s version of it.”

The official release date is yet to be announced.

TAKE A LOOK AT SOME FIRST LOOK IMAGES HERE

Reacting to the upcoming Winnie the Pooh: Blood and Honey, tweeps expressed excitement for the upcoming film.

“Is anyone surprisingly hopeful about this or is it just me? Piglet looks horrific,” wrote one tweep.

“I’m weirdly extremely hyped for this!?” wrote another tweep.

“No joke, Blood and Honey looks scary as hell.”