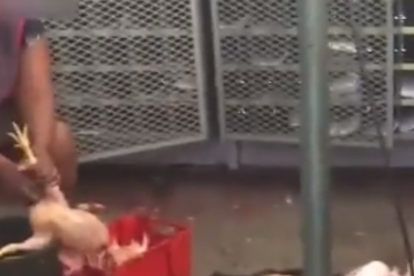 A video of White River Post Office employees using their workplace to slaughter chickens has once again gone viral in South Africa.

In the clip, the post office manager is led to the makeshift “slaughterhouse” and is shocked by a gruesome scene of chickens being slaughtered by an employee.

Many weird and wonderful things that take place in the workplace can at least make the life of an employee more interesting. And of course, it’s nothing new to find certain staff members trying to make some extra money by selling all sorts of things to their co-workers.

Usually, those things include snacks, or maybe even handbags and Tupperware but never before were employees caught running a slaughterhouse in one of the workplace spaces – until now that is.

A strange video clip of some staff members using one of the offices at the Post Office as a slaughterhouse has rendered many people speechless after it was shared on Twitter by @AgentLeonV3.

In the clip, the employees-turned-butchers, are caught in the act by a shocked manager who was baffled to see that dozens of chickens were already plucked and killed.

“This is a post office, this is not a killing place,” the manager can be heard telling the sorting room employees.

Some light is shed

According to IOL, they have since made it clear that the video was actually taken in 2018. They also said that the staff members involved, were since fired.

“This incident dates back to 2018, and the employees involved were subsequently dismissed.

“We are now getting very positive feedback from customers about the service at White River Post Office.”

“Just think about it, selling freshly slaughtered chickens could have turned the Post Office into a profit-making business. #missedopportunities”

“They might be onto something here. Mail Fried Chicken, get your post a free wing for airmail, get a free leg with home delivery or get your Sassa, post, and chicken all at once. The marketing is endless”