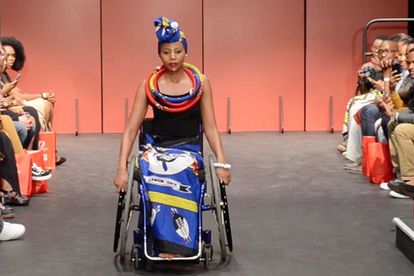 Model and actress Lebohang Monyatsi on the runway. Image via Twitter @Face2faceAfrica

Model and actress Lebohang Monyatsi on the runway. Image via Twitter @Face2faceAfrica

Runaway model, disability activist and Generations: The Legacy actress Lebohang Monyatsi opened up about her journey from the Miss Wheelchair World pageant in 2017 and co-owning Miss Wheelchair South Africa.

Eyewitness News recently caught up with Generations: The Legacy actress and runaway model Lebohang “Rolling Goddess” Monyatsi to talk about representing South Africa at the Miss Wheelchair World pageant, where she has crowned first princess.

The pageant was the first-ever edition held in Warsaw, Poland which brought together 24 young women from 19 countries.

Monyatsi who plays the character of Rosie in Generations: The Legacy is the first South African woman in a wheelchair to be a runway model.

She told the publication that she’s always dreamt of being a model even though she had no one she could identify with on the runways as there were no opportunities for persons in wheelchairs in the industry.

“I have always loved modelling from a young age but I couldn’t pursue it because of a lack of opportunities for people with disabilities. As we all know, the media impacts society and there’s no one who looks like me in the media industry to serve as an inspiration to those who live with disabilities. I decided to embark on this journey so I can be a role model to everyone who thought it is not possible.”

Monyatsi, who is also a former national wheelchair basketball player, worked alongside media personality Basetsana Khumalo on a modelling campaign for Woolworths in 2018.

She also tells the publication that she’s the co-founder of Miss Wheelchair South Africa.

“I am the co-founder of Miss Wheelchair South Africa. The main objective of it is to break the stereotype associated with persons with disabilities, to change the mindsets, change the narratives and give opportunities to women with disabilities to impact change however they see fit, to be the change that they wish to see in the world,” said Monyatsi.

She was diagnosed with Post Polio when she was 3 years old which affected her left leg, which resulted in it being smaller and thinner than my right one.

Though the inclusion of disabled bodies within fashion and beauty is a step in the right it seems the industry has a long way to go.

“The challenges that I got or I still get as a model with a disability is getting jobs. Agencies believe that the production managers or the producers have to specify that they need someone with a disability, meaning that they cannot just send me to audition with others. I have to wait for a specific call, that’s so disadvantaging.”