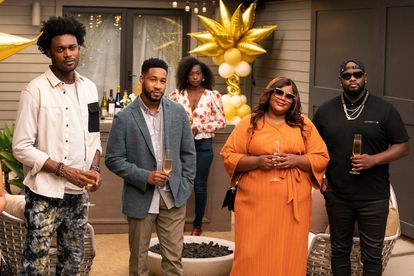 Always on the hunt for the latest and hottest series? Check out these nine binge-worthy international series available on Showmax during the month of March.

But navigating this strange new society is only the start of their troubles as Mother’s “natural child” threatens to drive what little remains of the human race to extinction.

Created by Phil Augusta Jackson (Brooklyn Nine-Nine, Insecure, Key & Peele), Grand Crew follows a group of young Black professionals who gather at their favourite bar to wine down and unpack the ups and downs of life and love in LA, proving that life is always better with your crew.

Grand Crew has been compared to shows likes The Office and Friends. So grab a glass of wine, sit back and hit play.

PEN15’s second – and final – season brings us eight new episodes to close out the gloriously weird and uncomfortably honest story of 13-year-old besties Maya and Anna, living through the horrors and highs of teenhood in the year 2000.

Thirty-something creators Anna Konkle and Maya Erskine return as the puberty-stricken versions of themselves, surrounded by actual 13-year-olds.

PEN15 was nominated for three Emmys last year, including Outstanding Comedy Series, and Season 2 holds a 100% critics’ rating on Rotten Tomatoes. It’s also been nominated for Critics’ Choice and Writers Guild of America awards, among other honours.

“It is bowing out at the peak of its powers,” says Guardian.

A DISCOVERY OF WITCHES S3: FIRST ON SHOWMAX | BINGE NOW

In the final series of A Discovery of Witches, Matthew and Diana return from their time-traveling trip to 1590 to find tragedy at Sept-Tours. They must find and piece the Book of Life back together, as their enemies gear up against them.

Adapted from Deborah Harkness’s bestselling All Souls trilogy, A Discovery of Witches is a vampire meets witch story of forbidden love, starring Matthew Goode (Downton Abbey, The Crown) and Teresa Palmer (Warm Bodies, I Am Number Four), who are both up for 2022 Critics Choice Super Awards for their lead performances. Also look out for Black Reel nominee Parker Sawyers (Barack Obama in Southside With You) joining the cast this season.

A Discovery of Witches adds BAFTA, National Television Awards and Academy of Science Fiction, Fantasy and Horror Films nominations to its credit list.

From the creators of Line of Duty, Vigil investigates the mysterious disappearance of a Scottish fishing trawler and a death on-board the submarine HMS Vigil, which bring the police into conflict with the Navy and British security services.

DCI Amy Silva (BAFTA winner Suranne Jones from Gentleman Jack and Doctor Foster) and DS Kirsten Longacre (BAFTA winner Rose Leslie from Game of Thrones, The Good Fight) lead an investigation on land and at sea into a conspiracy that goes to the very heart of Britain’s national security.

Based on Aldous Huxley’s classic 1932 novel, Brave New World imagines a utopian society that has achieved peace and stability through the prohibition of monogamy, privacy, money, family, and history itself.

Brave New World won Royal Television Society Awards for its costumes and visual effects, but be warned: unlike the book, the series isn’t going to make it into any high school syllabus.

Brave New World carries an 18SN age restriction, with The Guardian suggesting that it should have been renamed Brave Nude World and adding, “Not since Game of Thrones have I seen so many nude scenes so happily, lavishly and gratuitously staged for our viewing pleasure.”

The dedicated doctors, nurses and staff of Gaffney Chicago Medical’s state-of-the-art trauma centre are back for Season 6 of the hit medical drama from multi-award-winning executive producer Dick Wolf (Law & Order).

This season, Chicago’s medical heroes are pushed to the limit as they fight on the frontlines of a global Covid-19 pandemic. Together, they must adapt to the new normal as they confront new and unprecedented medical challenges.

Friendship isn’t a big thing. It’s a million little things. In Season 3, just when the friends seem to find their new normal, their lives are upended when Covid-19 rocks their world – forcing them to once again lean on each other in ways that are both moving and aspirational.

A Million Little Things has an 8/10 rating on IMDb. As TV Fanatic says, “Can you think of a show that better encapsulates the feeling of living in the disaster year that is 2020?

“A Million Little Things is akin to Chicken Soup for the Soul…as if you were snuggling up with a warm blanket, eating comfort food, and spending time with beloved friends. In times like these, you learn to cherish any moment that gives you that feeling.”

Set in early 1990s New York, at the height of the crack cocaine epidemic, Wu-Tang: An American Saga is the fictionalised account of the formation of legendary hip hop supergroup Wu-Tang Clan.

Created by Grammy-nominated Wu-Tang leader RZA with Alex Tse (Watchmen), Season 1 of the series was nominated for an Emmy and three Black Reel Awards, including Outstanding Drama Series.