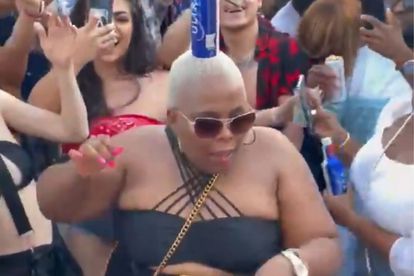 Mbali Thusi at a Black Coffee gig in Texas. Image via screenshot from Twitter.

Mbali Thusi at a Black Coffee gig in Texas. Image via screenshot from Twitter.

A video of the South African-born Thusi dancing her heart out to the beat of DJ Black Coffee’s tunes in Houston, Texas, went viral on social media before you could say #SavanahChallenge.

Black Coffee shared the video of Thusi dancing to an Uncle Vinny hit while balancing a bottle on her head in the vein of #SavanahChallenge on his Twitter account on Monday 3 May. In the video, all eyes are on the “groove queen” as people pulled out their phones to film her groovy moves.

“Houston was insane,they were shook but ubeyivibe uNono 😅💃🇿🇦,” wrote Black Coffee in the caption.

In a second video, you can hear some familiar South African words, such as “Yebo” and “Haibo”, in the background.

Black Coffee captioned the video: “But nah besilapha”, meaning “we were here”.

ALSO READ: Who’s your uncle? Meet the 19-year-old behind the #UncleVinnyChallenge

In an interview with TshisaLIVE, Thusi revealed that she was just trying to show love to Mzansi and make sure Black Coffee feels at home.

“As a Durbanite, I had to represent and make sure that Coffee feels at home!,” Thusi told TshisaLIVE.

The “groove queen” was born and raised in KwaZulu-Natal and said that she likes supporting South African artists.

“I was born and raised in Hammarsdale KZN. As a South African, I always like to support our SA artists. As you know, Black Coffee is the king of music, so there was no way I could miss his show,” she continued.

She also went on to mention that she has been “gifted” by some Americans at the gig following her nifty footwork on the dancefloor.

“I do turn up with my friends when we do day parties. People really loved me there and the crowd was very friendly. One lady gave me her Valentino hat and someone gave me a bottle of Patron,” she added.

Most Tweeps were excited to see the South African party vibe shared overseas and felt like the “groove queen” represented Mzansi. Her dance moves and the #SavanahChallenge was easily recognisable along with her whole vibe. Have a look:

Others joked that a lady in the background should be given a flight to South Africa because she knows how to party.