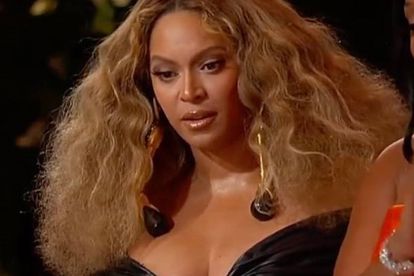 Well, we knew SOMEBODY was going to become a meme this evening – but few of us could have predicted that Beyonce would be the one tickling our ribs on Sunday. The superstar singer achieved yet another record at the Grammys 2021 – but she was left somewhat stunned when Trevor Noah started giving her stage directions.

Beyonce tied the all-time Grammy record for most wins ever by any artist, racking up the 28th award of her illustrious career. It’s also the most wins by any female artist EVER. She appeared on stage with Megan The Stallion to collect a ‘rap song of the year’ accolade. Beyonce features on Savage Remix, which also saw her collaborator pick up a third Grammy.

The acceptance speech in itself was an iconic moment – but things were about to take a turn for the awkward. As both singers tried to leave the stage, Trevor Noah stood in their way – much to the surprise of Beyonce…

when Trevor Noah stops them from leaving the stage and Beyoncé just standing there fkfnrnfnfn she wanted to LEAVE https://t.co/3FBmRGTpcE

Grammys 2021: Beyonce on her ‘record-breaking win’

Of course, this small faux pas from Trevor Noah (nobody tells Beyonce if she can or cannot leave a venue) was taken in a jovial fashion, as the artists came together to celebrate the wonderful achievements of all nominees on the night. Beyonce also scooped a going for Best R&B Song, with her George Floyd-inspired Black Parade.

“As an artist I believe it’s my job and all of our jobs to reflect our times. So I wanted to uplift, encourage, celebrate all of the beautiful Black queens and kings that continue to inspire me and inspire the whole world. It’s such a magical night, thanks!”