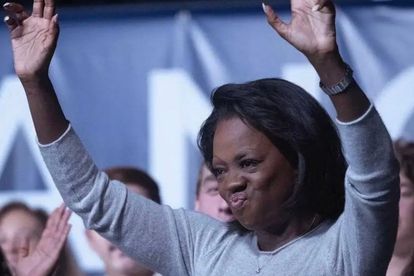 VIOLA DAVIS IN ‘THE FIRST LADY’

Showtime’s The First Lady “peels back the curtain on the personal and political lives of three unique, enigmatic women”. The series takes a deep dive into the East Wing of the White House in Washington DC where the United States’ first ladies spend most of their time.

Speaking on Entertainment Weekly’s Around the Table series, Viola Davis said playing Michelle Obama is “definitely not like any other job”.

“I mean, with Michelle Obama anyway, they know how she talks, how she walks, how she wears her hair, the different incarnations of her eyebrows… I didn’t feel like I could approach it like any other character.”

Viola Davis topped Twitter’s trending list not for her brilliant acting skills but for pursing her lips throughout The First Lady.

One tweep wrote: “The fact that no one ever noticed this about Michelle Obama but Ms Viola Davis dedicated her life to it.”

“Michelle Obama did not purse her lips THAT much, What possessed Viola to think she should do that in every scene. I never thought I would see the day where Viola Davis gave a bad performance,” wrote another tweep.

“She’s Viola Davis. I don’t care if she poking her lip out too hard to play Michelle Obama. Imma stand beside her.”

WHAT THE CRITICS SAY

Season one of The First Lady has received low reviews from entertainment critics. Rotten Tomatoes has given the series a 37% rating.

Reviewing the series, USA Today writes: “First Lady seems destined to go down as a good show that got bogged down by too many competing narratives to become great. There are just too many cooks in the kitchen – or rather, too many first ladies in the White House.”