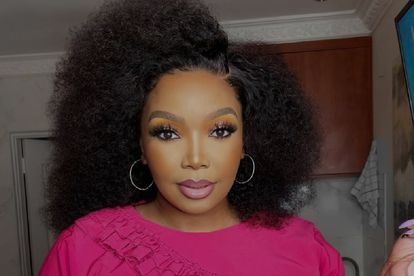 Award-winning presenter and actress Thembisa Mdoda-Nxumalo has told fans she has “A BANGER” in store for them in the form of a new DSTV show called Suxoka.

The House of Zwide actress revealed that she will be hosting the new show, telling fans they do not want to miss it.

“New show alert. Asoze ndinixokisele bantase (I wouldn’t lie to you brothers and sisters), so when I say you do not want this show to pass you by, believe me. A banger.”

ALSO READ: ‘The Queen’s’ Thembisa Mdoda has joined the cast of ‘House of Zwide’

According to a statement by DSTV, Suxoka (which is IsiXhosa for ‘Don’t lie’) features couples whose trust issues need to be laid to rest in order for the relationship to get back on to stable ground and move forward.

While both Uyajola 9/9 and Suxoka expose cheaters, the Mzansi Wethu show hosted by Thembisa will also get couples to take lie detector tests.

On the show, couples will share their love story with the audience and Thembisa as they bring them into their world sharing some of the reasons there has been a loss of trust. Previous attempts to move one from their break of trust have been futile and Thembisa and show are their last chance to do so.

“Mzansi Wethu’s content slate keeps evolving and growing, and we are thrilled to shake things up with two new and one returning show – something our loyal viewers love and appreciate,” says Shirley Adonisi, Director of Local Entertainment Channels at M-Net.

“As a channel, we’re proud to expand our new and original offering, premiering shows that appeal to the sensibilities and interests of our versatile and discerning audience,” she concludes.