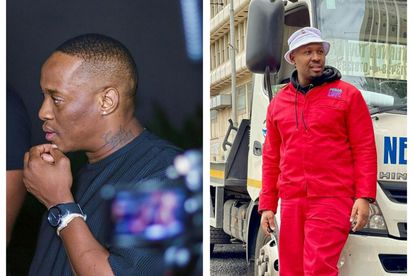 Things took an unexpected during last night’s episode of Uyajola 9/9. Images via Instagram: xolani_maphanga and @official_jubjub

Things took an unexpected during last night’s episode of Uyajola 9/9. Images via Instagram: xolani_maphanga and @official_jubjub

The tv presenter was tasked with finding out if Shaun’s girlfriend was having an affair and as expected, she was dabbling and the sight of Jub Jub made her so angry that she could not resist but hand him a slap for revealing her secret.

The lady was seen shopping for sunglasses with the man she was cheating with. Jub Jub made sure to mention to her other boyfriend that when she sees her wearing them, he must remember that another guy bought them for her.

During the confrontation, things got heated, the lady was everywhere trying to get the attention away from the fact that she was indeed cheating. Before slapping him, she threatened Jub Jub with a slap and oh boy, did her threat come to fruition.

After swinging a slap Jub Jub’s way, the presenter was seen leaving, telling the crew to switch off the camera lights and informing them that he was not going to close off the show.

Jub Jub then told his bodyguard, only known as Sam that not protecting from the slap was not right.

Some people said that it was only a matter of time before someone fought him for his actions.

Jub Jub’s disrespect finally caught him hands and its about time. What a satisfactory episode

While another tweep said, “Jub Jub getting slapped was bound to happen. I’m only surprised it took this long”

X TAKES OVER FOR THE NIGHT ON ‘UYAJOLA‘

For the second episode of the night, Jub Jub was nowhere to be seen instead X-Repo‘s X (Xolani Maphanga) took over the reigns and went after the cheaters.

Even though X did a fairly good job, people missed Jub Jub for pouring petrol to the fire.

True to sorting out people’s issues before forcefully taking what he is there for, X made sure to get the other side of the story…without success.

The woman that had brought X for the cheating bust found out that her man was busy with someone else. X asked how long they had been together, when the confronter said two years, X was visibly shocked because at this point the cheater was choosing the other woman. They had only been together for 6 months.

The guy ended up telling X to take his former girlfriend and date her since they came together. X gladly accepted the agreement and said he is taking her since he does not want her.