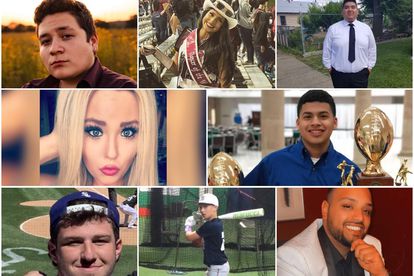 Like any Travis Scott fans, concert-goers at his Astroworld festival expected to have the time of their lives…

But for a handful of fans, the experience would cost them their lives.

Sadly, eight young people ranging in ages from 14-27 died at the Friday night event which turned deadly after a crowd surge crushed their bodies.

The youngest of the victims was 14-year-old John Hilgert, a student at the Memorial High School in Texas.

Students and teachers at the high school remembered him by tying ribbons in his favourite colour – green – around the school campus.

His former baseball coach shared a touching tribute about the teen on his Instagram account. He wrote: “John made an impact on anyone who met him and they always remembered him. I have memories of John I’ll never forget. You had to love the kid. No option not too cause he was who he was.

“John was an angel the whole time I knew him… impacting others for good and he himself was a legend. Will meet again John. Till then watch over us my friend. Lived his life to the fullest”.

According to Daniel’s brother Basil, the 27-year-old died in the crowd after trying to prevent his fiancé from getting injured.

He shared in a Facebook post: “My brother Danish Baig, a beautiful soul whose smile would light up the room and put everyone before himself. Last night he showed his courageous act to save my sister in law/his fiancé from those horrendous things that were being done.”

Brianna was a 16-year-old with a passion for music and dancing, who attended Heights Hill in Houston.

“Gone from our sights, but never from our hearts. Dancing was her passion and now she’s dancing her way to heaven’s pearly gates”, read a Facebook post from her relative, who also shared a link to a GoFundMe page to assist the family with burial expenses.

Gone from our sites, but never from our hearts. It is with profound sadness we lay to rest our beloved Brianna…

Rudy was a big Travis Scott fan and travelled almost 500km to attend the Astroworld festival.

“My brother was the sweetest person, friendly, outgoing. He had many friends because he was always there for everyone,” his sister Jennifer told news outlet Laredo Morning Times.

23-year-old Madison attended the concert with her younger brother Ty.

The former high school cheerleader’s sibling tried to pull her to safety during the stampede, but claims she “disappeared” in the crowd.

She said in a Facebook post: “She had a special way of making every single person she encountered in life feel special, appreciated, and accepted no matter what. I just know she is the most fabulous angel in Heaven. It was a true honor to call you my best friend and now my guardian angel. I love you forever”.

After the tragedy on November 5, 2021 at Astroworld there will forever be a piece of my heart missing. Words will never…

Family and friends reveal that the “caring and kind” mechanical engineering student once saved his own mother’s life after she was involved in a car crash.

According to his father, he used his own strength to break a door and free his mother from the wreckage.

He added: “He loved his mom. He said everything that he was doing, it was trying to help his mom. The entire goal.”

Jake was one of Franco’s friends who also lost their lives at the Travis Scott concert.

The 20-year-old was studying art and media at Southern Illinois University Carbondale.

His father Ron told news channel ABC7: “Jake was beloved by his family and by his seemingly countless number of friends for his contagious enthusiasm, his boundless energy, and his unwavering positive attitude.

“Always deeply committed to his family, he was affectionately known as ‘Big Jake’ by his adoring younger cousins, a name befitting of his larger-than-life personality”.

21-year-old Axel travelled from Washington to Houston to attend the concert by himself.

The computer science student had to be identified by his father via a picture of his face and sneakers via the Harris County Institute of Forensic Sciences.

“It was his first time going to an event like that,” Axel’s aunt, Cynthia Acosta, told the TV channel KTRK.