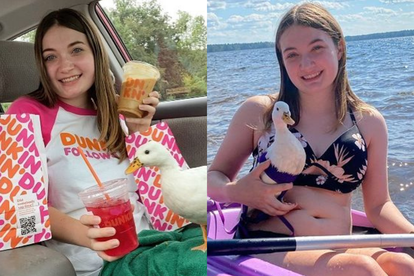 Krissy and Munchkin having the time of their lives. Images via Instagram: @dunkinducks

Krissy and Munchkin having the time of their lives. Images via Instagram: @dunkinducks

A 20-year-old TikTok user and her pet duck are bringing positivity to the world while raking in big bucks. Krissy Ellis has been taking care of ducks since she was only a little girl but only got her popular duck Munchkin when she was in her teens. The two of them have been entertaining the masses ever since.

It isn’t every day your love for animals allows you to do what you love and make a ton of money at the same time. Krissy Ellis is however one of the few lucky people in the world who has a ton of fun while bringing in a pretty decent income.

Krissy and her duck Munchkin have become quite popular after she started a TikTok page for the two of them called “Dunkin Ducks” which comes from the popular donut shop, “Dunkin Donuts”.

Various clips of Munchkin eagerly waiting at the Dunkin Donuts order window have gone viral as people seemingly love watching the duck peck at her usual order of water with extra ice chips.

Krissy and Munchkin have just over 2.7 million Tik Tok followers and are part of the content creators fund. According to her, she makes more money than she used to make while working for 40 hours at a grocery store after doing only about 30 minutes of content creating, video editing, and sharing online.

IOL reports that she makes just over R63 000 monthly and also gets a ton of exciting deals and sponsorships making her yearly income around R760 000.

Krissy who used to be bullied for her funny videos now encourages people to persevere because they never know where life may lead them.