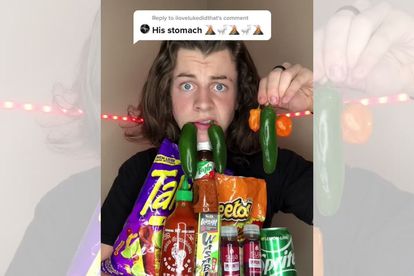 The 18-year-old content creator has fans flabbergasted at his ability to down some of the hottest chillis, peppers and more hot sauces that Hot Ones could ever handle…

Luke – whose TikTok handle is @lukedidthat – has the social media platform shook every time he takes on a spicy challenge – and it has everything to do with his ability to not show any reaction.

Some of his most popular videos include ones where he responds to followers issuing him a challenge – like swallowing a full tube of wasabi paste followed sharply by the world’s hottest pepper – the Carolina Grim Reaper, a cross between the ghost pepper and red habanero.

Also read: TikToker and her duck rake in R63k a month with viral clips [watch]

Another sees him devour a bowl of ramen noodles mixed with some of the hottest chilli sauces on the planet.

A third witnesses him chug a handful of ghost peppers, topped with chilli sauces and spices followed by two habanero peppers with a Carolina Grim Reaper thrown in for good measure.

And his 10 million followers are hooked – and shook – by his antics.

“Your toilet is in my prayers,” said one follower. Another added; “No reaction on camera, big reaction in the toilet tomorrow,” added another.

Meanwhile TikTok users are facing off in another food challenge – this time involving Squid Game, the hit Netflix series which has taken the world by storm.

Users on the video-sharing app are giving it a go recreating the honeycomb cookie from a challenge seen in episode three of the show, in which players must carve out a shape from a caramalized sugar cookie, or die.

TikTok users are now creating the traditional Korean Dalgona cookie using two ingredients: sugar and baking soda. Then comes the rough part, creating a shape in the cookie, and carefully carving it out – without cracking it!

Do you think these TikTokers would survive the cookie challenge? Watch and see for yourself…

How to make the perfect dalgona candy from the squid game