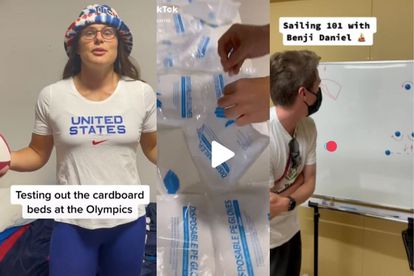 Tokyo’s 2020 Olympic Games will always be remembered for being held during a difficult period of the COVID-19 pandemic. Instead of letting the pandemic get them down, athletes have taken to TikTok to show fans behind-the-scenes footage of the Olympic Village, COVID-19 protocols and the by now infamous beds.

ALSO READ: Throwback: What life was like in the Olympic Village of 1984 [watch]

For sports fans, it’s great to see professional athletes show their personalities. It may come as a shock to some people that Olympic athletes don’t behave like robots in their free time. TikTok and other social media platforms have given athletes the agency to be as quirky, fun and as weird as they possibly can be.

A number of athletes have shown their followers the infamous cardboard beds. USA Sevens rugby player Ilona Maher has been the Olympics’ biggest TikTok star. In the video, she revealed to her followers just how tough the beds are at this year’s Olympics.

Australian water polo player Tilly Kearns has also been active on the video-sharing app. She posted an insightful video on the COVID-19 protocols in the Village.

Team South Africa are also surfing the TikTok wave. Although they aren’t as active as the above-mentioned athletes, it’s good for South African fans to have their athletes represented on the platform.

The Olympic athletes on TikTok have been posting with the hashtags #OlympicTikTok, #Tokyo2020, and #TokyoOlympics, with plenty of content that shows the Olympic Village and all the systems in place to make the space livable for the competitors.

Stormers to take URC trophy on open-top bus parade: ALL the details!

Crunchy onion rings: When game-day is here and you have hungry guests

The importance of defining your unique selling point