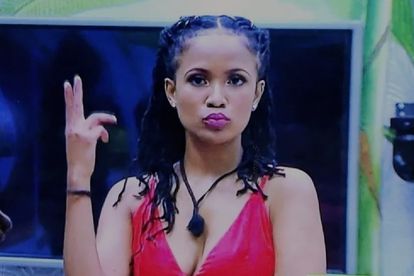 Thobeka ‘Venus’ Mtshali was one of the two Big Brother Mzansi season 3 housemates to get evicted this past Sunday, 13 March. The other was Naledi ‘Nale’ Mogadime. Upon leaving the show, many viewers were curious to know who Venus would actually date between the two housemates she kissed in the house – Themba (who is till in the house) and B.U (evicted).

It turns out she has made up her mind…

During her exit interview posted on the Big Brother Mzansi YouTube channel on 14 March, Venus (who is a musician) was asked about her time in the house. From her strategy to her high and lowlights, and even her flings.

Speaking about the two gentlemen that she ended up kissing, whom she says she got to know in the Big Brother house, the Richards Bay singer said that they are her type of men. However, having spent time with both of them, she’d definitely want to date Themba.

“When I started to get to know Themba more (because there was a phase where we weren’t talking and then we started talking again) it was nice… Who am I open to dating? For real, for real? Themba.”

When the singer was asked who is the best kisser between the two guys, she also chose Themba.

“B.U kisses by the book. Themba is more passionate,” she explained.

Being in a house with strangers and surrounded by cameras 24/7 can be challenging. For Venus, who many found to be a bit more on the reserved side, the cameras made it hard for her to pray as loudly as she says she usually does when there are no cameras around. Another experience she was not comfortable with was not being able to cry when she was overwhelmed with emotion.

“I’m a very emotional person and there’d be moments when I’d want to break down but I can’t because I’m around people,” the 26-year-old said.

When it comes to her highlights, she explained that winning was always a happy feeling for her. Whether she would win something on her own, as a team when they’d win their weekly wager or when a friend would win – those were exciting moments for her.

WHO WOULD VENUS LIKE TO SEE WINNING THE R2 MILLION GRAND PRIZE?

Themba’s name popped up quite a few times during Venus’ interview. She did not hide the fact that she’d love to see him win the ultimate grand prize of R2 million come finale day. However, if Themba does not clinch the title, she says that she’d like for Terry to win