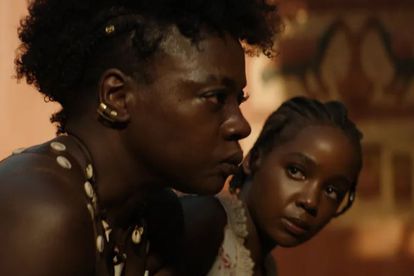 More first-look images from The Woman King were published on social media by Vanity Fair where Viola Davis and Thuso Mbedu shine side-by-side.

VIOLA DAVIS IN ‘THE WOMAN KING’

The Woman King is inspired by a true story and follows Agoji, an army of woman warriors who defends the Kingdom of Dahomey in West Africa in the 17th, 18th and 19th centuries. Viola Davis will play the general of the army, while Thuso Mbedu will play Nawi, an ambitious recruit.

Speaking to Vanity Fair, Davis said she has never role like this before and described it as “transformative”.

“There’s always a vision you have for your career, but there are very few roles as an actress of colour. Dark skin with a wide nose and big lips. I’m just gonna continue to say it. Those stories are extraordinarily limited,” said the 56-year-old actress.

TAKE A LOOK AT A TEASER HERE

A SPECIAL MOMENT BETWEEN VIOLA DAVIS AND THUSO MBEDU

Gina Prince-Bythewood also told the publication there was a special moment between Viola Davis and Thuso Mbedu that was completely unscripted.

When Thuso Mbedu’s character, Nawi, is chastised for talking back and being disrespectful, Davis’ character snatches her machete from her.

“That was a turning point in the scene. Thuso felt it innately and these tears just sprung to her eyes because they were both so deep in the scene. It was such a special moment to witness,” said Prince-Bythewood.