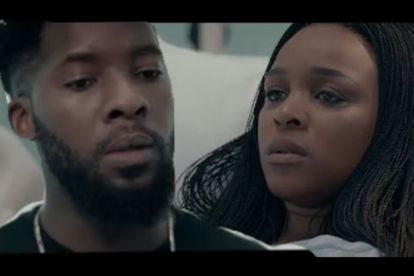 Talented star Kwenzo Ngcobo – who is famously known by his on-screen name Qhawe Zulu opens up about his butt-naked scene in The Wife.

Qhawe and Hlomu trended at the beginning of season two before Zandile and Nkosana’s viral raunchy scene.

The Wife’s Kwenzo Ngcobo recently admitted in an interview with Sowetan that he didn’t expect the sex scene to be so explicit.

“I wasn’t aware that my ass would show. I thought the camera was going to cover me from the side.”

The actor who plays Qhawe in the Showmax telenovela that it was also important for the production to make men comfortable with these kinds of scenes.

“It doesn’t always have to be women showing nudity, men can and should do it too.”

She is now pregnant with a Zulu baby and although hasn’t admitted it, has no idea who’s baby it is.

HIS CHARACTER IN ‘THE WIFE’

Fans of the telenovela gasped and clutched their pearls at the sight of Qhawe’s toned behind at the beginning of season two when the show introduced Khanyi Mbau’s character – Zandile The Resolute.

Ngcobo also tells the publication that he’s not fazed by the sudden focus on his athletic derrière.

He hasn’t watched the scene in full and admits that he’s been getting compliments from his female fans since the raunchy scene.

“The most flattering are ‘Kwenzo doesn’t miss leg day’ and ‘you have a beautiful butt’,” he giggles.

“The director told me two days before we shot. I had no time to go to the gym.”

For Ngcobo, this was work, and it sent a deeper message than just being a cheeky scene in a popular telenovela.

He says he sat down with the director and had an open conversation on how they could play the scene and make it natural.

“No one wakes up in the morning after a night of intimacy with someone else and is fully dressed.”