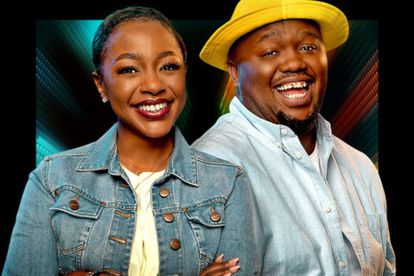 Skhumba Hlope is best known for his hilarious jokes and smooth radio hosting on Kaya 959’s morning show. Thato Moeng has wowed sports lovers on Supersport with her stellar presenting skills and for being the “First Lady of sports”.

The Saturday Showdown is described as the “boldest and biggest” came show to grace local television screens.

Five teams each captained by Mzansi celebrities will battle it out for a R3.5 million grand prize.

HOW EXACTLY WILL IT WORK?

The show, produced by Red Pepper Pictures, will see the five teams face off over 13 episodes.

The teams on The Saturday Showdown will go head-to-head in a series of game testing skills (such as shooting hoops), luke, puzzles, pop culture activities and karaoke.

“We’re thrilled to premiere an epic game show like The Saturday Showdown on Mzansi Magic – something to keep our viewers entertained and engaged,” said Shirley Adonisi, director of local entertainment channels at M-Net.

“It’s the kind of show that will appeal to viewers across age and interest – be they into sports or pop culture. It’s the latest in the hyper-local content strategy that we are putting out, content that is keeping up with viewers’ evolving and eclectic tastes.”

TAKE A LOOK AT THE TEASER HERE

ALSO READ: Belinda Davids’ ‘The Greatest Love of All’ comes to Joburg Theatre

WHICH CELEBS WILL BE ON ‘THE SATURDAY SHOWDOWN’?

Take a look at which celebrities will be captaining teams on The Saturday Showdown.