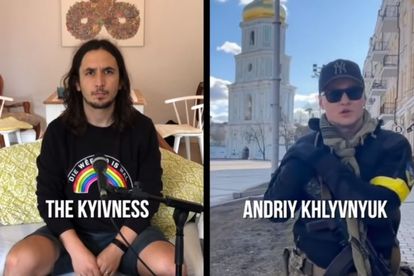 The Kiffness does it again! And this time he uses his music to shed light on the violence currently taking place in Ukraine. The South African musician is known for his viral remixes, often shedding light on important social issues.

In his recent video, The Kiffness remixed a folk song, performed by the frontman of top Ukrainian band, Boombox (Бумбокс). According to Texx and the City, Andriy Khlyvnyuk, cancelled his American tour to defend his country against Putin’s armed forces.

After spotting the video of Andriy singing a Ukrainian folk song, й у лузі червона калина (Oy u luzi chervona kalyna), The Kiffness gave it his signature twist and announced that all royalties remunerated from the song will go to humanitarian aid towards Ukraine’s Armed Forces.

The video blew up and in less than 48 hours, the song would accrue over $7 000 in royalties. The song also featured prominently during the Trafalgar Square Protests in London, as reported by Texx and the City.

“I firstly would like to thank Andriy and the entire Boombox family for affording me the opportunity to collaborate on this song. I hope this song shows that it doesn’t matter who you are or where you are in the world, we can all do something to stand in solidarity with Ukraine. I’m glad that this song is helping in some small way, and I hope it inspires others to use their talents and resources to also lend a hand,” The Kiffness told Texx and the City.