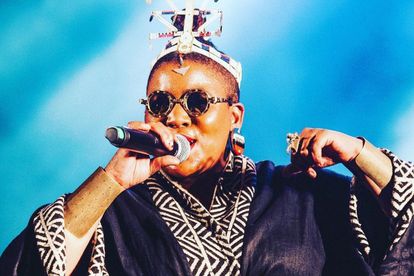 Thandiswa Mazwai is bringing back her ‘intimate’ show ‘A Letter to Azania’. Image via Facebook: Thandiswa Red Mazwai

Thandiswa Mazwai is bringing back her ‘intimate’ show ‘A Letter to Azania’. Image via Facebook: Thandiswa Red Mazwai

Thandiswa Mazwai is one of the most influential South African musicians in the industry. Having kicked off her music career in 1998 with Bongo Maffin, Mazwai inspired a generation of powerful singers and has been dubbed “South Africa’s finest female contemporary singer” by The Guardian.

A LOOK AT THANDISWA MAZWAI’S CAREER

Thandiswa Mazwai was a part of the Kwaito group Bongo Maffin at the start of her music career. After six award-winning albums with the group, she ventured into a solo career. Her first album as a solo artist, Zabalaza was released in 2004 and won her four South African Music Awards (Samas).

Her second album, Ibokwe features her hit song Ingoma which has on replay in many homes across the country. Her music has always been inspired by writers like Steve Biko and Franz Fanon.

“My work gave me an opportunity to share my thoughts and have a meaningful conversation with my generation about Blackness,” she says in her bio.

‘A LETTER TO AZANIA’

Thandiswa Mazwai is bringing back her 90-minute show, A Letter to Azania back to the theatre. Speaking to the Sunday Times in 2018, she said that the show gives audiences a deeper look into the “intimate details” of her childhood, her search for Azania and what that means.

“[It will] allow me to put up a show with a very particular focus instead of just playing a bunch of songs for a festival.”

“The idea of Azania possibly goes back to Kush/Ancient Egypt and that’s thousands of years back. The history alone requires a few lectures and then there is the psychology of the oppressed and why imagination is an important of resistance.”

A Letter to Azania will be staged on Friday 25 Febuary at the South African State Theatre at 19:00. The show has no age restrictions.

Tickets range from R275 to R550 and are available here.