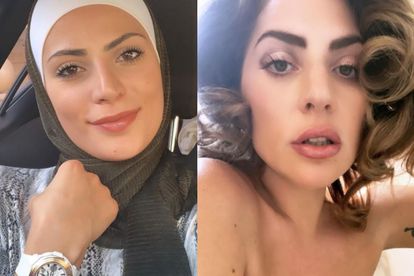 Taekwondo Olympian Julyana Al-Sadeq from Jordan has been called a Lady Gaga lookalike by the singer’s fans. Gaga’s fans, known as the “Little Monsters” took to Twitter to compare Al-Sadeq, who was taking part in the Olympics yesterday to their favourite pop star.

Julyana Al-Sadeq is a 26-year-old Taekwondo athlete and became the first Jordanian female athlete to win gold in her discipline at the Asian Games when she claimed victory in the 57-67kg category at the 2018 edition in Indonesia.

You can’t comfortably say that Al Sadeq makes a good Lady Gaga doppelgänger. The picture of her that went viral shows off Al Sadeq’s side profile more than anything and the Little Monster decided that picture of her looked identical to Lady Gaga.

At first glance it does but when you take a good look at both Gaga and her apparent lookalike, you can see the difference.

Al-Sadeq was going viral during her Round of 16 defeat to Brazil’s Milena Bra Titoleni in the Taekwondo Women’s Welterweight 57-67kg category.

Although it’s quite clear that Al-Sadeq and Gaga don’t bear a striking resemblance, it must have been a good laugh for the athlete involved to hear about the weird attempts to compare her facial features to that of the Hollywood star and songstress.

LITTLE MONSTERS TROLLING GAGA ABOUT BEING AN ATHLETE

The Little Monsters reacted to a picture of Al-Sadeq that was posted by a Lady Gaga fan page, Gaga Daily. The picture was simply captioned “Why is Lady Gaga at the Olympics”.

As stated above, at first glance Al-Sadeq does strike a slight resemblance to Gaga. The Little Monsters had fun with this picture and made jokes about Gaga being talented enough to be a recording artist, actress and make time to train and take part in the Olympics.

Fans also took the opportunity to say that Lady Gaga is also taking part in the tennis at the Olympics after she posted snaps of her in all-white Nike gear, looking her Wimbledon best.