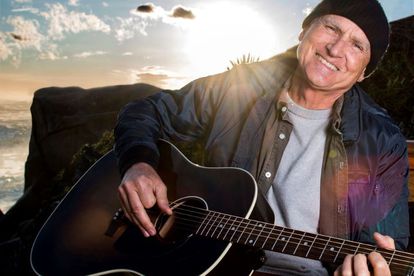 Steve Louw is something of a rare South African treasure. This naturally gifted singer-songwriter is responsible for some of the past four decades’ finest pop and rock airtime, thanks to a disarming humbleness that’s afforded him the ears and respect of some of the music industry’s true heavyweights.

Headlight Dreams was released globally by SONY ATV on 7 May, testament that this one-time All Night Radio lead singer and celebrated solo artist in his own right, is still achieving extraordinary feats, in part due to his rich network of fans — many of whom are world-renowned producers, mastering legends and multi-platinum selling musicians.

Chatting with him from his little slice of heaven in the Tsitsikamma, along with his dog, Ringo, Steve unpacked his Headlight Dreams journey.

Seven years of percolating and three days in Nashville

It took seven years to realise his latest body of work, which was recorded in Nashville along with his long-time friend and producer Kevin Shirley (John Hiatt, Joe Satriani, Led Zeppelin, The Black Crowes). Grammy Award-winning singer-songwriter and genius guitarist Joe Bonamassa also pitched in.

“It’s really about the songs,” Steve says. “Having something to say, so yes, it took a little longer, but strangely enough, since making this album and working with Kevin (Shirley) again, it’s made it so much easier for me.

“I’ve since written a whole batch of songs and, in writing those songs, I now know the band I’m going to play with, and I can imagine what they’ll do with them, so the Headlight Dreams journey has been such a great experience. Kevin did such a great job and we managed to make a good album in only three days!”

Having the confidence to leave the house and present the songs to the group of musicians Kevin had corralled, was equally disarming for the respected veteran.

“When I wrote these songs, I was too close to be objective as to each one’s merits. Especially after seven years.”

These songs had been percolating for an extended period.

“That’s the thing,” Steve agrees. “That’s the thing. Can I still do it? And right up to the time that I got on the plane to fly to Nashville, Kevin just wouldn’t listen to the songs. I said I’ll send you 15 songs, and he said, no. Just come to the studio with your 10 best songs; and when we walked into the studio on the first day, he said right, what’s your first song?”

On that day, Steve played and sang his first pick to the band. “I was well prepared,” he recalls. “Upon listening to it, they said ‘cool!’. I mean, these guys score it down as you play it. They write themselves notes and 15 minutes later, there’s a recorded track. It’s mind-blowing!”

Working with that level of expertise is sobering, but one needs to remember Steve and Kevin have been working together since 1987’s second All Night Radio album, The Killing Floor, so this was common ground for both titans.

To record Headlight Dreams, Kevin chose a converted church that offered a classic analogue Neve console which saw Steve recording his latest album as he would have captured his earlier albums in the 1980s.

“Kevin likes that studio,” Steve says of the decision to record in God’s house.

“He said to me, a year before, when are we going to make an album again? At the time I kind of shrugged and said that I didn’t know,” he continues.

“Kevin then reminded me that he’s booked up a year in advance, so best I commit to a date if Headlight Dreams was ever going to see the light of day. He then said he was due to be in Nashville on the 28th of February 2020, to produce Joe Bonamassa’s next album, now remember this was in late February 2019.”

That was that. The dates went into the calendar and Steve bought his ticket to fly.

At that stage, Steve already had 10 or 12 songs ready, while three more were written in the build-up to flying out to the US. “I was concerned that the tracks might not be strong enough. Kevin had to remind me that I could write great songs because he’d produced so many of them in the past,” he recalls.

With lingering self-doubt, even after a nearly 40-year career in music, Steve’s quick to point out just why that was for him. “It’s such magic or ephemeral process that you think to yourself that I was lucky then, it’ll surely never happen again?

“People go to law school and become lawyers, they know what that is and what it means, but because music is such a magical thing; you’re taking something out of the air and turning it into something other people can hear, there’s nothing that guarantees a positive outcome.

I kept thinking, I know I did it before, but that was just luck,” he recalls.

That said, four decades in luck has never left Steve’s side.

Fast-forward to February 2020, pre-lockdown: Steve arrives in Nashville and heads into a studio where the only person he knows is Kevin. The rest of the band brought together to record are strangers to him.

“I felt like I was exposing myself and I didn’t want to embarrass myself in front of people who are at the top of their game,” he remembers. “You don’t want to be “that guy”, seen as a hack who’s only there because he’s Kevin’s friend from way back when. You just don’t.”

“I always knew they’d play their part, and it would be a good sounding record,” Steve adds. “People will always be polite and kind, but you can see in their eyes whether they’re getting off on it, or merely going through the motions. Fortunately for me, when we all walked away, the consensus was we can’t wait to do the next one. Getting that kind of affirmation from your peers is worth its weight in gold.”

“Kevin is the kindest, most loyal, greatest friend you could ever have,” Steve asserts. “He’s busy, everybody wants to work with him and yet he’s so invested and committed to everyone and everything he touches.

“So, after we’d said our goodbyes, I headed to the terminal with my guitar and backpack when suddenly, over the PA, I heard my name being called because I’d forgotten my carry-on luggage. And when I got to it, Kevin was wearing a big smile because he had convinced the airport staff to break protocol to alert me.”

I flew to New York on the 3rd of March, en route back to South Africa, and Kevin headed to LA to film with Trevor Rabin who was scoring Joe Bonamassa songs with a full orchestra for a live concert film they were going to film last August at Red Rock in Colorado.

Steve’s wedding anniversary was coming up two days later and unbeknownst to him at the time, Kevin sent “Wind in our Hair”, the track Joe Bonamassa played on, to mastering legend, Bob Ludwig and within a day Bob had mastered the track and Kevin sent it on to Steve on the day of his anniversary.

“When I got it, I played it on my little Bose speaker out into New York. It was one of the greatest moments ever!” To top it off Bob sent an e-mail with the final mastered track saying, “What a wonderful song, what a wonderful vocal performance, I loved working on this”. “I practically did a summersault,” Steve recalls.

What Headlight Dreams confirms, at every step of the journey for Steve, is that his work is worthy, even before it’s released to the world. If anything, the calibre of not only the players, its producer and mastering engineer, all endorsed Headlight Dreams as the extraordinary body of work that it is, and soon you’ll get to applaud it too.