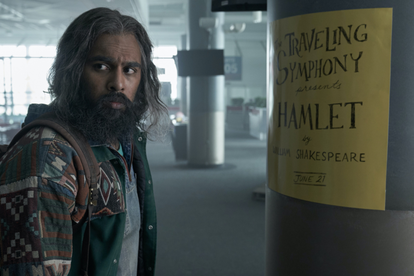 Based on the 2014 Arthur C. Clarke Award-winning novel by Emily St. John Mandel, the HBO Max series follows the scattered survivors of a devastating global flu pandemic as they try to rebuild the world anew and hold on to the best of what’s been lost.

Station Eleven has a 98% critics’ rating on Rotten Tomatoes, with Rolling Stone calling it, “beautiful, haunting, and ultimately uplifting.”

‘Station Eleven’ is ready to cater to your binging needs

Station Eleven’s main post-apocalypse thread follows The Travelling Symphony, a troupe of nomadic actors who bring music and performances of Shakespeare’s plays to the small communities dotted around the perimeter of Lake Michigan.

“The Travelling Symphony’s motto, ‘Survival is insufficient’, is all about asking, ‘What’s important? What do we need?’ It’s definitely more than shelter, water and food. We need art. We need humour.”

“Station Eleven is not about a pandemic, not really – it’s about the way art, community, and family endure even after the end of civilization as we know it.”

The novel that inspired the 10-part limited series was published long before Covid-19 became a global reality. When filming began in Chicago in January 2020, no one could have known that two episodes in, the shoot would get shut down, and only begin production again a year later – this time in Toronto and with strict Covid protocols in place.

For the real-life actors making Station Eleven, the parallels would bloom several layers deep as they took on the roles of actors putting on a show following a pandemic that stops the world in its tracks.

“We experienced what the entire rest of the world experienced, which was locking down, closing down, and then trying to say, ‘How do we move on? How do we rebuild? How do we figure out how to do this thing that we love so much, and makes us whole, in this new world?’ … So much of making this show during a pandemic was about how much community has to rebuild, how much you need other people, and how much performance and creation and artists actually are the thing that helps you get through it.

“That’s in the show. I think the show would have always been brilliant… but somehow, every single artisan on the show, every craftsperson, every actor, everyone having the same sense of memory, and then having to put their fear aside because making the thing was actually what they needed to do, I think that seeped into the DNA of the show.”

Davis also sings the praises of the set and costume design teams for doing “such a beautiful job of articulating ecstatic dedication to art, which I think is so integral to the Symphony. It’s like, ‘Oh, yeah, this is worth surviving for. This would feed you.’ It was really beautiful.”

Vogue hails Station Eleven as “haunting, gorgeously made, heartfelt, an end-of-the-world vision that lifts you up as much as it gives you nightmares… A dystopian series full of death and menace that threads in so much humanity and optimism that you want to be in its precarious world. I was gripped, cheered, and horrified.”

After all, as Financial Times says, “For all the horrors of the premise, you can’t help but be comforted by a series driven by the faith that humanity’s creativity and kinship will always endure.”