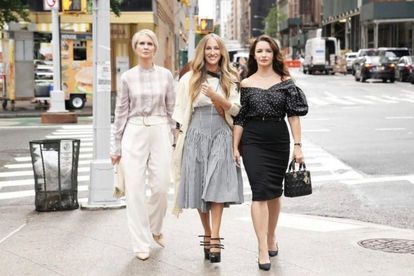 Sex and the City is easily one of those feel good classic movies. If Carrie Bradsaw and her friend group didn’t make you want to move to New York, are you really a fan? Filming for the reboot started on the streets of New York earlier this month and fans can’t wait to see what’s in store this time around. Here’s the tea!

According to Dazed, only Sarah Jessica Parker, Cynthia Nixon and Kristin Davis (Carrie, Miranda and Charlotte) were spotted in Manhattan’s Upper East Side where filming took place. Kim Cattrall (Samantha) was missing from the reboot.

A few of the love interests who have previously appeared on the show, Aiden, Harry, and Mr Big will make an appearance on the reboot but it looks like Carrie’s relationship with Mr Big is a tad bit shaky.

The couple got married at the end of the first Sex and the City movie but are now in the middle of a divorce.

In the leaked Sex and the City script, Carrie has hit her 50s and is living her life as a podcast host. Her friends lend an ear to her as she pours her heart out about her divorce. Here is an interesting line from Carrie in the leaked script.

“I was taping the podcast, I was washing my hair”. Yes, I wasn’t eating or sleeping, but at least I felt good about my marriage. Now I’m just one of the wives he was taking care of?”

NEW CHARACTERS IN ‘SEX AND THE CITY’ REBOOT

The reboot will also see Sex and the City‘s first-ever non-binary character that’ll be played by Sara Ramiez.

Sara’s character, Che Diaz, is a podcaster and stand-up comedian with a big heart and a scandalous sense of humour. Other actresses that are set to join the cast are Nicole Ari Parker who will play Lisa Todd Wexley, and Karen Pittman who will play Dr Nya Wallace.

The reboot will be a ten episode series named And Just Like That. The series is set to premiere on HBO Max. A release date is yet to be announced for the upcoming reboot.

Check out some behind-the-scenes snaps!

ALSO READ: Daniel Craig was ready to hang up his tuxedo before ‘No Time To Die’