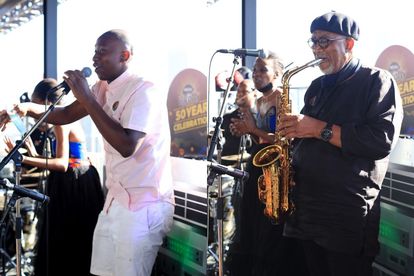 The Hallmark Hotel in downtown Johannesburg was THE place to be on Thursday 23 September. Ricoffy celebrated its 50th birthday and the brand honoured South Africa’s heritage with a custom-made Ricoffy tin, designed by illustrator Karabo Poppy and a stunning bucket hat or “spoti” designed by Gert-Johan Coetzee.

The event saw amazing performances from the powerful duo Mafikizolo, Mr Jerusalema himself — Master KG and Sipho “Hotstix” Mabuse who was accompanied by songbird Tabia. The legendary jazz musician’s son Biko also joined him on stage.

Sipho “Hotstix” Mabuse was the perfect musician to open the Ricoffy 50th birthday event. Not only did he sing beautifully, but he also serenaded guests with his saxophone.

The moment Mabuse’s keyboard player struck the first few chords of his hit Burn Out, the energy in the room instantly felt electric. Everyone gathered on the dance floor as veteran muso Mabuse brought the house down.

IT’S A RAP WITH BIKO MABUSE

Hearing the legendary jazz musician play his classic hit Burn Out was spectacular, but another incredible moment was seeing him invite his son to the stage and he certainly brought the house down with his rapping skills.

Biko Mabuse seems to have picked up his love of music from his father and together the two were simply unstoppable on stage.

‘CONSEQUENCE OF SOUND’ BY 12 DOGS

12 Dogs is Biko Mabuse’s group with four young music enthusiasts who could possibly be South African hip-hop’s next big thing.

Consequence of Sound serves as 12 Dogs’ debut album that was released on 23 September. The album is driven by hip-hop sounds with hints of jazz.

12 Dogs also addresses a few inequalities in South Africa that might make you think twice.

The lyrics on the seventh track Take a Bow of Peace read: “Some promises were made in ‘94 are now abandoned. A minimum wage is the payroll, while capitalists law low and cash in all the profits we slave for.”

LISTEN TO ‘TAKE A BOW FOR PEACE’ HERE