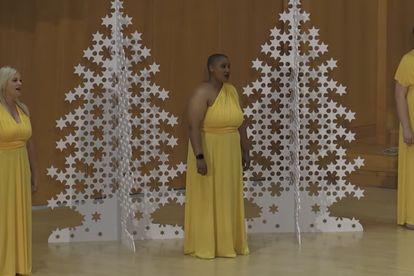 Silent Night is one of the season’s most popular Christmas songs, but this rendition by a Stellenbosch choir will leave you breathless.

STELLENBOSCH CHOIR – VOICES OF THE HEART

The VOCES CORDIS (Voices of the Heart) choir was was established in February 2022 by André van der Merwe. The choir consists of 80 choristers from across the Cape Peninsula aged between 18 and 50, as reported by www.goodthingsguy.com.

According to reports, van der Merwe established the group as a continuation of his work with the Stellenbosch University Choir and the Stellenberg Girls Choir and many of the members are alumni of these choirs.

Since February, the choir has appeared on national television, performed with Nataniël at the Grand West and was invited to perform at the Woordfees Art Festival in Stellenbosch, reports goodthingsguy.

This rendition of Silent Night is van der Merwe’s latest arrangement for the choir, complete with a South African flavour.

“South Africans tend to emulate the European winter tradition when we celebrate Christmas. This rendition is sung in Afrikaans, isiXhosa and English, adding a South African flavour to the iconic Christmas Carol.”

“I believe that South Africans have a common heritage – we must increasingly be open to all our cultures and learn how to celebrate this diversity,” he told goodthingsguy.

The choir’s latest video just in time for Christmas is their rendition of Lize Beekman arrangement, “Sonneblom uit Bethlehem” (Sunflower from Bethlehem). And boy, are you in for a treat.