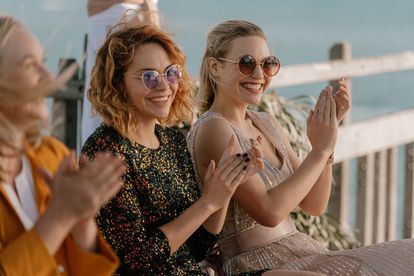 “Troukoors is like good champagne: light and bubbly and more-ish, with a tendency to bring out people’s naughty sides,” says Candice Fangueiro, head of content at Showmax. “It’s like Younger or The Bold Type, but set against the splendour and romance of the Cape wedding industry.”

Ilse-Lee van Niekerk (Getroud Met Rugby, 4 Mure, Die Boekklub) stars as Jessica, a wedding planner who’s surrounded by love but struggling to find it for herself.

“What I found really interesting is that it represents alternative relationships,” says Bianca. “The world is moving in new directions, especially in terms of how we think and talk about sex and sexuality.

“Sex positivity is increasing. As South Africans we are often inclined to being conservative when it comes to the relationship types we represent on TV. But Troukoors reflects a lot of the relationships I see around me. It shows the real issues people experience in relationships.”

“The overarching idea of the series is love is love,” says Ilse-Lee. “I love the fact that, especially with the two dads, and Abi as well, it’s just accepted. It’s just the norm. It’s not an issue. It’s about what works for you: which type of love is the best for you, and how can you be the best to someone else.”

But Troukoors isn’t just another Hollywood fairytale, where every moment has perfect sunsets with fireworks in the background.

“What’s refreshing about this series is that Louis and Albert created realistic stories that also show there’s no one person who is going to be perfect for you,” says Armand. “So there might be someone who gives you sexual gratification, but not emotionally.

“And then there’s someone who fulfils your emotional needs, but the physical attraction isn’t there. Or someone is too laid back and you want more intensity. You want direction, not someone who is beige. You know, those kinds of things.”

In line with the growing trend internationally, Troukoors hired an intimacy coordinator for the sex scenes. “There are a lot more physical scenes than in the average South African and Afrikaans TV series,” says Albert discreetly.

“We worked with intimacy coordinators, which is something we’ve never done before, and it was really good. They have a great way of working with the actors to make everyone feel comfortable and safe. When people kiss in an Afrikaans series, it’s usually those Egoli-kisses from the late 80s where it’s like two fish whose mouths open and stick together, and then they just stand there.

“So, bringing in an intimacy coordinator helped a lot with actors having to find one another on a physical level and trust one another, so that you could have actual passion on screen.”

“It opens you up, because it just takes any uncertainty away, and creates such a safe space,” says Ilse-Lee of the experience. “When you know what is a ‘Yes’ and what is a ‘No,’ then suddenly there’s a whole new world that you can use and colour in. Because then you can really touch what you’re allowed to touch: you can go full-throttle on the ‘Yeses’.

“It is extremely empowering. Not just in terms of being touched, but also to be touching, because then the uncertainty and discomfort is eliminated. You know I’m allowed to touch this; this is safe.”

A refreshing take on modern families

“Troukoors gives us an opportunity to ask questions about how a blended family works,” says Kevin. “How do men – who don’t have wives – fulfil all those roles in the family. What are the roles they should be playing? Because society tells us, ‘This is what men should be and do, and this is what women should be and do.’ And here we break the rules. It’s what’s so stunning about this project to me.”

The freedom of creating a series for streaming

Albert says this all came from the freedom of creating a series for Showmax. “When you make something for linear TV, you’re making something for 16- to 95-year-olds to watch together and you must build the story in such a way that you take everyone into consideration,” says Albert.

“The interesting thing about a Showmax production is that there’s an age restriction, and this is something that people can watch on their laptops or phones, on their own. So you don’t have to worry about it as much, because you know it isn’t necessarily the entire household watching together.”

That’s not to say Troukoors is dark. “If you want to laugh, and sit with a smile on your face for half an hour, then this is the show for you,” says Christiaan. “There are serious themes that are explored, but there’s always humour to balance it out. It’s just pure fun.”

“The great thing about Louis and Albert, which is true of all their series, is that their stories are always about hope,” says Nina. “We laugh a bit, we cry a bit, but in the end it is about people becoming more themselves in the end than what they were at the beginning.”

And who doesn’t need some laughter and some hope after the year that was 2021?

Watch Troukoors (Wedding Fever) first and only on Showmax from 13 December 2021. Showmax has already renewed the romcom for a second season, launching in 2022.