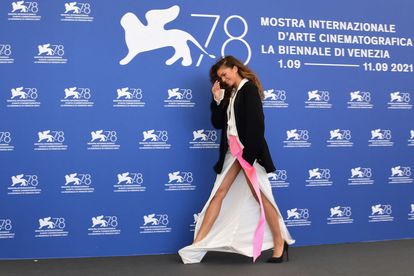 US actress Zendaya attends a photocall for the film ‘Dune’ presented out of competition on September 3, 2021 during the 78th Venice Film Festival at Venice Lido.
Image: Miguel MEDINA / AFP

US actress Zendaya attends a photocall for the film ‘Dune’ presented out of competition on September 3, 2021 during the 78th Venice Film Festival at Venice Lido.
Image: Miguel MEDINA / AFP

One of the most hotly anticipated sci-fi blockbusters in years was finally set to land on Friday 3 September , as the world premiere of Dune arrived at the Venice Film Festival. Journalists and industry folk were ordered to hand in their phones to prevent any shots from leaking out from the screenings.

A DIFFICULT JOURNEY TO VENICE

With a $165-million (R2.4 billion) budget and a critically adored director in Canadian Denis Villeneuve, hopes are high that the film can shake the curse that has attached to previous attempts to adapt the landmark 1960s novel.

Through hits like Sicario and Arrival, Villeneuve has put himself alongside Christopher Nolan as one of the rare directors who can deliver deadly serious cinema that also pulls in the punters.

He has also proved his worth to sci-fi fans with Blade Runner 2049, a lauded sequel to the Ridley Scott classic. The build-up has not been all roses, with the release delayed by almost a year due to the pandemic.

Villeneuve has also clashed with Warner Bros over its decision to release the film on streaming platforms at the same time as cinemas.  He told Total Film that decision was “ridiculous”, saying:

The best way I can compare it is to drive a speedboat in your bathtub.

The film is playing out of competition at Venice, which has a particularly starry line-up on Friday, with Kristen Stewart also premiering her biopic of Princess Diana, Spencer.

Set many millennia in the future, Dune follows the tribal battles for control of “spice”, a drug that extends life and delivers prophetic powers, on the inhospitable planet of Arrakis, which also happens to be infested with giant worms.

The brainchild of author Frank Herbert, Dune was first published in 1965 and became a six-volume space opera of massive influence, not least on Star Wars.

It is the biggest-selling and most-read science fiction novel ever, but also the most commented upon and the most studied, said Renaud Guillemin, an eminent member of France’s community of “Duniens”.

It was the prototype for the sort of world-building universe in science fiction books, with their own coherence, references and foundations,” said Guillemain, comparing it to what Lord of the Rings did for fantasy.

Some of the images and ideas have also become sci-fi staples, including its giant sandworms (hello “Tremors”), suits that recycle sweat, or the Bene Gesserit, an order of female martial arts experts with thought-control powers.  Fans also praise its visionary edge, anticipating debates over global warming and the impact of technology.

Despite its ready-made audience and clear cinematic potential, previous transfers to film have been famously difficult. An attempt by horror auteur David Lynch in the 1980s turned into an expensive and catastrophic flop. A previous attempt by cult Franco-Chilean film-maker Alejandro Jodorowsky fell apart after four years of work.