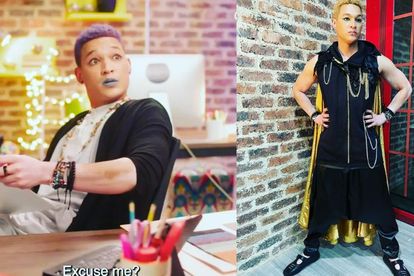 The first season of SABC1’s Ubettina Wethu was such a success that when Brighton Ngoma left Scandal in September last year to film the second season, fans of the e,tv soapie were left “chopping onions”. Brighton termed this a natural progression as he had been with Scandal for a decade in the role of Quinton.

He is now back on TV screens in his role as T-Bang on Ubettina Wethu which is worlds apart from his Scandal character.

If you watched Ubettina Wethu‘s Season 1, you would know that Brighton was killing it as the petty, jealous T-Bang at the marketing agency Nubia.

He upset a lot of viewers with his tricks and scheming ways because it always seemed like he would get his way.

Brighton added that it is going to take ages before traditional society is accepting of people who are different to them.

ALL-NEW CAST FOR THE SECOND SEASON OF ‘UBETTINA WETHU’

The synopsis for Season 2 read:

“Bettina Sikhakane, now an accounts manager at brand management firm Nubia, has made some progress towards her dreams of owning and running her own business, but she finds herself seeking financial freedom from her family responsibilities, moving out and starting her life as a strong, independent woman.

“But the questions that fans will be asking are whether her obsession with Dingaan Jiyane will go anywhere and just what role will his half-brother Duma play in her love life?”

WHAT HAPPENED ON LAST NIGHT’S EPISODE?

The Tuesday 13 September episode of Ubettina Wethu was entertainment galore! Betty was so excited with her new love and ended up getting exposed that she is still a virgin. Watch the clip below:

Ubettina Wethu airs from Monday to Wednesday at 19:30 on SABC 1.