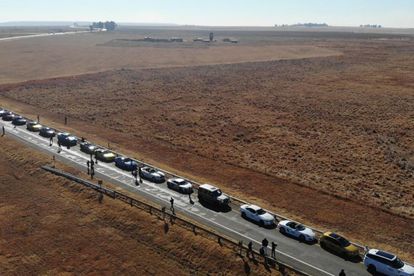 As the Durban July wraps up at Greyville racecourse in Durban, fans of the show aren’t fully blown away.

Although Africa’s biggest horse racing event topped the trend lists on social media, what most people were searching for wasn’t attainable – the rich and famous flaunting their wealth around.

This somewhat disappointment led to Tweeps reminiscing one of Durban July’s phenomenal attendees Sam Mshengu of Sam Holdings, who drove down about 72 high-end vehicles to the July in 2019.

All his fleet, with personalised number plates, embarked on a motorcade in a show of wealth and style.

Since that Durban July tweeps argued that nobody comes near Sam Mshengu’s swanky entry to the horse racing and fashion-inspired event.

However, shortly after this impressive stunt authorities began to dig into Mshengu’s wealth which exposed alleged fraudulent activity such as how he fraudulently obtained his SA Citizenship.

This led to the businessman’s arrest in Emalahleni, Mpumalanga, by the Hawks later in the year.
His arrest also propelled an investigation into his business. However, Mshengu maintained that he made his wealth through his logistics business, as well as his involvement in coal mining.

Check out some of the tweets: