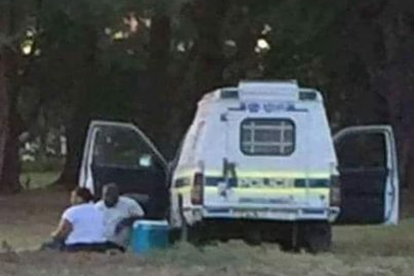 This cop has taken a break from thugs to have some romance. Image via Facebook: Buhlebenkosi Morris

This cop has taken a break from thugs to have some romance. Image via Facebook: Buhlebenkosi Morris

South Africans have been left both laughing out loud and speechless after one local shared a snap of a police officer making use of his work van to have a romantic picnic. In the snap, the cop and his lady friend can be seen chilling next to the van with a cooler-box and all.

Many of us have been told a number of times that South African police officers are facing a shortage of police vans which has resulted in a problematic late response when they are called during emergencies.

One cop has left many South Africans questioning whether or not there really is a shortage of police vehicles after he was spotted chilling beside his police van while having what appeared to be a nice and relaxed picnic with his significant other. The cop in question was not wearing a police uniform.

“I usually catch criminals, but now I caught feelings for you, baby girl”

Many locals had no words for the cop and his picnic while others simply laughed it off. Many didn’t seem to have a problem with the police officer using his official work vehicle for personal business.

“He couldn’t cuff criminals so he cuffed her.”

“This sh** can only happen in South Africa”

Earlier this year we reported about a traffic officer in Lydenburg, Mpumalanga went viral for all the wrong reasons.

Footage of his drunken malaise through a local shopping centre angered social media users nationwide. There are now calls for the cop to be suspended, following the “contravention of his civic duty”.