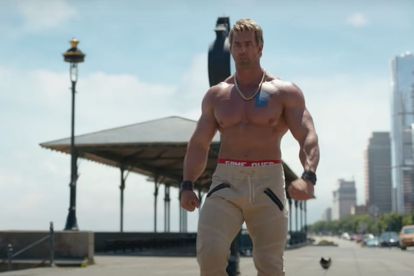 Ryan Reynolds does not fit into his Deadpool suit anymore. This after the Hollywood actor’s new character named Dude made its debut in a hilarious clip from the upcoming movie, Free Guy.

According to Men’s Health, the actor used a video on his YouTube channel to poke fun at the Hollywood fitness industrial complex by pulling back the curtain and give a behind the scenes look at Dude, a muscle-bound bad guy who appears to be a major obstacle for Reynolds’ protagonist in the film. Dude is quite ‘jacked and is supposed to be Reynolds – at least that’s how he’s credited in the trailer.

In the video, Reynolds, whose physical prep for other roles like Deadpool has made him the subject of plenty of coverage detailing his workout plan, breaks down the steps he took to become Dude after he pauses the movie preview.

“I do know you hear actors complaining about how hard their movie workouts are,” Reynolds says in a voiceover as the massive Dude gets out of bed, grabs a gold chain, and comes into the frame. “I don’t have time for that. I’ve been at this one week and I’ve got to tell you… it’s coming in nicely.”

The actor makes a mockery of the real-life steps he’s probably taken in the past to get a non-deepfaked body for work. “I start every day with a protein bomb made exclusively of human muscle. It’s completely organic and illegal.”

In the adventure-comedy Free Guy, a bank teller who discovers he is actually a background player in an open-world video game decides to become the hero of his own story, one he rewrites himself. Now in a world where there are no limits, he is determined to be the guy who saves his world his way…before it is too late.

Free Guy, directed by Shawn Levy, arrives in theatres on 13 August 2021. According to Digital Spy, the action-comedy also stars Jodie Comer and Joe Keery as the programmers who make Guy self-aware. Comer’s character teams up with Guy inside the game to try and reform it. Taika Waititi (Jojo Rabbit, Thor: Ragnarok) stars as the game’s publisher who is trying to stop them.