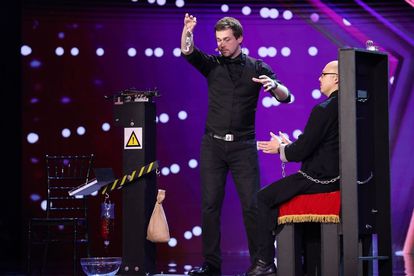 South African-born magician and illusionist Brendon Peel describes himself as an extremely versatile and dynamic entertainer. The world-renowned entertainer wowed international audiences on Romania’s Got Talent. Peel and his partner Li Lau received a standing ovation from the audience.

Brendon Peel and his escape artist stage partner, Li Lau, amazed the studio audience and judges with their magic act on Romania’s Got Talent. The Gqheberha-born talent, who is based in Johannesburg, earned four yes votes from the judges of the European talent show.

Peel and Lau are no strangers to international audiences. After an incredible stunt at the National Arts Festival in 2020, the entertainers captivated audiences across the globe and were even invited to participate in Britain’s Got Talent.

“Whenever Li Lau and I perform any type of massive act like this for the judges, it is always a nerve-wracking experience. Especially when the act is so potentially dangerous, however when performing, I get ‘into the zone’ which keeps me level-headed and focused,” said the 28-year-old.

Peel and Lau’s audition consisted of a combination of escapology and mentalism. While Li was cuffed to a chair, trying to pick locks that will set him free, the South African entertainer had to solve a bunch of Rubik’s cubes and then use them to add weight to a scale which, if tipped in the wrong direction, will set off the crossbow and send it flying directly at Li’s head.

“Getting a yes from all four of the judges as well as a standing ovation from both the judges and the audiences was a surreal experience.”

It honestly didn’t even feel real, similar to when the audience and David Walliams gave us a standing ovation at Britain’s Got Talent. It’s almost like I need to remind myself that these things happened,” said Peel.

TAKE A LOOK AT THEIR ‘BRITAIN’S GOT TALENT’ PERFORMANCE HERE

Brendon Peel is known for starring on the Travel Channel’s new television show Magic Caught On Camera where he featured alongside some of the top magicians and mentalists in the world.

His stage show has been dubbed “world-class” and “undeniably entertaining” by critics.

“It’s honestly such a blessing to have our works spread out across the world.”

“It has always been a dream of mine to spread my magic to all corners of the globe and doing my work across various places on major television platforms in the world is something that means everything to me and I will keep pushing to spread magic even more.”

His latest show, Impossible, made its debut in Pretoria and is set to visit KwaZulu-Natal for the Hilton Festival on 24 March and Gqeberha in April.

Tickets for the KwaZulu-Natal show are available here at R150 each.