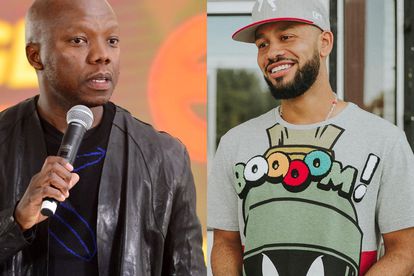 Metro FM radio presenter Tbo Touch and rapper YoungstaCPT have joined the panel of roasters for ‘The Roast of Khanyi Mbau’. Image via Twitter @YoungstaCpt

Metro FM radio presenter Tbo Touch and rapper YoungstaCPT have joined the panel of roasters for ‘The Roast of Khanyi Mbau’. Image via Twitter @YoungstaCpt

Local actress and television presenter Khanyi Mbau is set to become the first female roastee on Comedy Central’s Roast of Khanyi Mbau on 8 August. Comedian Mpho Popps will be the roastmaster for the occasion and there is a diverse group of panellists ready to throw some jokes at the Young, Famous & African star.

Afrikaans singer Steve Hofmeyr, larger-than-life reality star Somizi Mhlongo and platinum-selling rapper AKA have all been the centre of Comedy Central’s roasts. This year, Khanyi Mbau is making history as the first female roastee.

In an interview with Channel24, Mbau said she was ready to be on the roast stage adding that it was “the right time”.

“It’s like getting a star on the Walk of Fame in Hollywood. It is getting a star because the roast chooses you, which means you have to be worthy for them to feel that you can carry this content,” explained the 36-year-old.

On 6 July, Comedy Central announced the first batch of roasters set to feature on The Roast of Khanyi Mbau in an Instagram video.

Speaking to DailySun, the Wes-Kaap hitmaker said he was excited about being part of the cast.

“It is my first time being involved within the comedy space and I feel honoured that I am part of something this big,” added the rapper.

The Roast of Khanyi Mbau will take place at the Teatro in Montecasino in Johannesburg on Thursday 21 July.

Tickets for the two-hour show are already sold out, so Mzansi will have to tune in to Comedy Central (DStv channel 122) on 8 August.

The show will hit Showmax on 15 August.