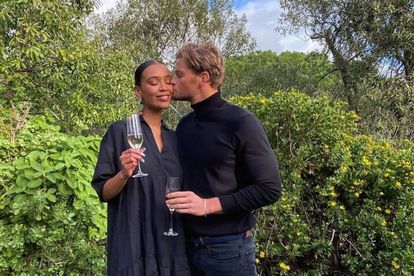 University of Cape Town student, model, actress Qiniso van Damme made history as South Africa’s first-ever Bachelorette, the gender role switch-up of the popular reality dating show The Bachelor. This followed her participation in The Bachelor season two where she made it into the top six. Qiniso was quite popular on the series which led to M-Net choosing her as the first bachelorette and the first black lead.

The Bachelorette SA began with 20 suitors and cricket coach Henk “Swazi” Nel and marketer Ehret making it to the final two. Gaz came out on top and the couple showed their love on social media as they went “Instagram official”.

ALSO READ: Phumzile van Damme: ‘I remain a member of the DA’

“I’m not good at making videos, but I found my love.. let me share! #TheBacheloretteSA,” wrote Van Damme on the caption of a romantic video she made.

Gaz also confessed his love for Qiniso on Instagram with a more lengthy display of affection.

“This has been one of the most incredible experiences of my life… I leave this show with a heart so full of love, gratitude and fulfillment,” wrote Gaz.

“I love you SO MUCH @qinisovandamme. You have shown me that magic exists…In more ways than I could ever imagine. You are undoubtedly my person, I truly believe we were written in the stars,” he added.

Gaz also shared another post of the pair’s adventures together.

“A little sneak peek into our under cover adventures… I love this girl❤️,” wrote Gaz.

Qiniso’s sister, politican Phumzile, was also feeling the love but extended a warning to Gaz. She took to Twitter to let Gaz know she trusts him…but that he should tread lightly.

“It’s been such a pleasure getting to know you @EhretGareth. You’re fun, funny and a genuinely kind person. I don’t trust very easily, and I trust you with my sister’s heart. Don’t f**k it up,” wrote Phumzile van Damme in a tweet that has since been removed.

Tweeps were impressed with Gaz winning over the heart of Phumzile as well.