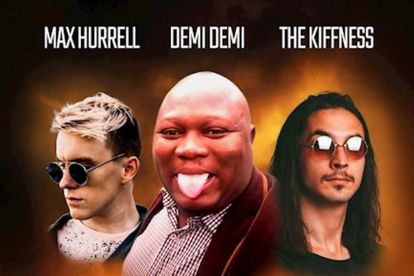 The three media personalities are having a little fun with ‘Tough Time Never Last’. Image: Supplied

The three media personalities are having a little fun with ‘Tough Time Never Last’. Image: Supplied

The clip centres on a 2019 viral video, titled Tough Time Never Last, by self-help guru Demi Demi — a mantra many South Africans will be clinging to as they continue to grapple with the COVID-19 pandemic.

‘Tough Time Never Last‘ was released by the motivational speaker, aka Baba Musia, but The Kiffness — real name David Scott — and Max Hurrell have now taken it one step further.

Hurrell was also the artist behind Zol, in which he used a snippet from Cooperative Governance and Traditional Affairs (Cogta) Minister Dr Nkosazana Dlamini Zuma’s speech regarding the hugely contentious banning of cigarettes during the lockdown.

Zol has had more than a million views on YouTube, though The Kiffness is also no stranger to creating parodies that have kept South Africans entertained during the difficult lockdown months.

Julius Malema (inspired by Master KG’s viral song, Jerusalema) and Sweet Corona, based on Neil Diamond’s iconic song, are just a few that have endeared him to South Africans.

In the three personalities’ latest collaboration, the two music producers — Scott and Hurrell — lightheartedly go back-and-forth in what could be described as a “diss track”.

Scott says Hurrell hasn’t released any good music since Zol, while Hurrell chirps: “Why don’t you write another parody because that is all you can do”.

The artists continue dissing each other until they are interrupted by Demi Demi, who quips: “Remember what Demi Demi said: Tough time never last”.

The two then decide to “join forces” by remixing Demi Demi’s catchy statement into an unexpected and upbeat house-genre backing track.

Also read: Watch: The Kiffness puts his own spin on ‘Loslappie’ and

Watch: Max Hurrell ‘remixes’ Cele’s ‘where did you get the cigarette?’