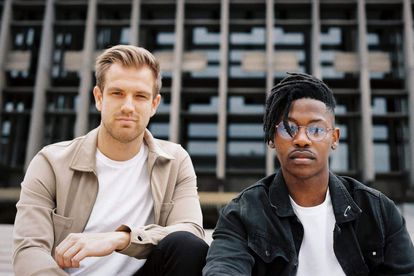 David Balshaw and Bubele Booi are the songwriting duo behind Noble. Image: Supplied

David Balshaw and Bubele Booi are the songwriting duo behind Noble. Image: Supplied

Noble is an international writer-producer duo based between Cape Town and New York City. Bubele Booi and David Balshaw are extraordinary multi-instrumentalists, and their music spans a wide range of genres. These include everything from Afro-Pop, Alt-Pop and RnB to Electronic with acoustic and electronic instrumentation.

Noble’s big claim to fame is undoubtedly when Beyonce invited them to write and produce 2019’s Find Your Way Back for the acclaimed The Lion King soundtrack, which was performed and executive produced by Beyonce herself.  Find Your Way Back touches on father figures and has been described as a riff on Circle of Life from the original film.

Listen to ‘Find Your Way Back’, produced by Noble:

Noble has also produced numerous Gold and Platinum records for artists in South Africa, among them Ami Faku and Lady Zamar.

The South African catches up with Noble

Doing music at the highest level and making music we love with people that we love even more. The next few years will see a lot of our focus narrowed on bringing our music and influences to the global market. Having a team based all around the world has been a game changer in that regard.

Seeing the world freak out about the artists we work with, but no-one in the general public knowing who we are.

To be honest, it happens every Sunday when we make a massive brunch, watch Formula One or a cheesy (yet well-written) rom-com on Netflix.

Music is a job but it’s also such a love that we’ll be doing it, in some capacity, until we die.

What does music mean to both of you?

I think our relationship with music has changed over the past few years. We’ve made it our everything for so long, but we realised that it’s not a healthy or sustainable way to live. Music used to be the movie and we were the supporting cast. Now we’ve come to realise that we are the movie. Music is a main character, and every movie needs multiple main characters to be good.

Our music is about?

Making people feel something. Music is just socially acceptable emotional manipulation. But there’s something powerful about making someone feel heard and not alone.

We would love to co-write with?

What is the most enjoyable part of your work?

Creating magic in the room with an artist. And helping an artist find their sound by creating unique records with them.

Bubele: We’re never really on stage. But back in the day when I used to play in church the MD would whisper really distracting things into our in-ear monitors. The whole band would have to try desperately not to laugh or ruin the really intimate moment of the song.

David: I just got some new boots so that’s a start.

Bubele Booi:  I thought someone stole my custom Air force 1s at the airport. I almost cried.

Bubele: My father. Cheesy answer, but he’s the definition of a driven, loving and present father and husband. In this world of absent fathers and deadbeat dads, my father is such an example of integrity and manhood.

Any gig we get to watch from backstage as an artist we work with performs a song we wrote. It’s the most moving experience to see music living and breathing. It often gets reduced to numbers and stats for us.

We have such starkly different production gestures that whatever we make separately is often dull, but together becomes really interesting. We also have a philosophy that it’s really hard to be 100% better than anyone –  so we just aim to be 1% better at 100 different things.

If you were not musicians what would you do?

Pick five words to describe yourselves

David: Can I have extra sauce?

Bubele: My phone has no battery.

David: The Big Short. I watch it twice a year because there are so many layers to it.

Bubele: About Time. It fundamentally shifted the way I saw the world.

David: Food. It brings me so much joy.

David: My NYU cap that Bubele bought me.

Bubele: This little necklace I broke and put back together with a flat rod.

Give us some real proper slang and what it means?

When a Xhosa guy calls another guy “bhuda” it’s not in reference to the religion.

Having a number 1 song on Billboard Hot 100.

Bubele: Being undefeated at the New York Times mini crossword.

When people want to have Zoom meetings when it could have been an email.

David: Coffee in the morning.

Bubele: A good crossaint and watching the Formula One on a Sunday.

On stage you tend to?

David: Work hard on what you can control. Have patience. Be kind.

Bubele: Movie moments are everywhere, you just have to watch the screen.

Bubele: No, except for Formula One.

We’re so happy to be around people that we love and who care for us.

We work with a nursery school in Cingco in the Eastern Cape and do everything we can to invest in those kids’ futures. Education is the most important thing in South Africa.