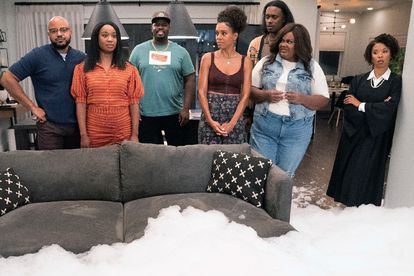 We all love a good sitcom. Now, imagine one that you can relate to. One that unpacks the struggles and challenges of your every day life, work and relationships, because the actors are actual friends off camera. Then look no further than Showmax’s new sitcom, Grand Crew.

Now streaming on Showmax, Grand Crew follows a group of young black professionals who gather at their favourite bar to wine down and unpack the ups and downs of life and love in Los Angeles, proving that life is always better with your crew.

Buzzfeed calls Grand Crew “a TV game changer”, “a television gem” and “a black sitcom that’s for everyone.”

The whole show is based off of our actual real-life friend group. There’s multiple people in the actual show and the cast that are in this group that meet up weekly at a wine bar in LA – Nicole, myself, Carl and our showrunner Phil, our writers Lamar [Woods], Aaron [Covington], Ify Nwadiwe… all of us are part of this crew that meets up every week to unpack the struggles and triumphs of life, work, success, everything.

“These… are real conversations we’ve had. It’s just Black men and women existing in this world and in LA, and trying to unpack the daily aspects of life. So the show is based a hundred percent off our real life and our real crew.”

– One of the cast members, Echo, said in an interview with Blackfilmandtv.com,

Nicky (triple-Emmy nominee Nicole Byer from Nailed It!) is a go-getter in both real estate and romance, while her brother Noah (Arrow’s Curtis Holt / Mr Terrific, Echo Kellum) is a hopeless romantic too eager to settle down.

Sherm (comedian Carl Tart, who writes on Kenan) is a low-key genius who plays the dating odds, Anthony (Aaron Jennings from Pure Genius) is mostly in love with his career, while Wyatt (Justin Cunningham from When They See Us) is just relieved to be happily married and out of the dating scene.

Watch the trailer below:

COMMENTS FROM THE CAST OF ‘GRAND CREW’

“Just six friends, you know,” Grasie says. “Enjoying wine, learning about each other, relationships… helping each other, being there for each other.”

As Nicole told The View: “It’s like working with my friends… It’s a party. We have so much fun.”

She told Access that the craziest real-life story that made it into Grand Crew was based on her experiences pole dancing, a hobby she started during the COVID-19 lockdowns.

For Justin, the role is a breath of fresh air. As he told Hollywood First Look, the show is “breaking the stereotypes of what it means to be Black men and Black women… So we don’t have to fit these molds. I’m an extremely goofy country person, so I get to live inside that. For basically the first time in my career, I get to play things that are closer to myself.”

He also praised the show’s treatment of mental health and normalising of therapy.

As The Mary Sue says: “The whip-smart comedy is one of the best new sitcoms on network television… During the pandemic, many viewers have been returning to their favourite comfort shows like The Office and Friends. Grand Crew is a welcome new entry into the genre, and is hopefully on its way to becoming a new classic. So sit back, grab a glass of wine, and meet your new friends.”

‘I said a little prayer’ – Sundowns’ Rhulani on Andries