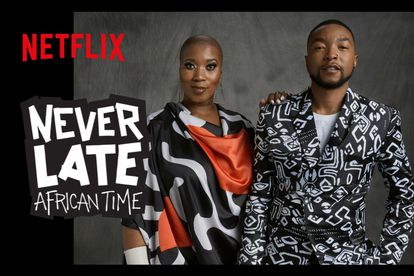 Netflix has announced the debut of their first African podcast titled Never Late | African Time via a YouTube video on 26 April.

The series features fascinating conversations with some of the continent’s most celebrated on-screen talent, from much loved industry veterans to exciting young actors, directors and producers. The podcast launches on 4 May.

The five-episode podcast is available on the AfricaOnNetflix official YouTube page, as well as Spotify and Apple. Viewers can tune in to a new episode released every Wednesday, with the podcast available in video and audio formats.

Hosts Andy Maqondwana (Kaya FM) and Zweli Mbhele (947 Radio) have no holds barred conversations with Africa’s foremost talent. The pair will be talking all things industry as the performers share their personal stories in and away from the limelight.

Who to expect on Never Late | African Time: